Culture | The Shape of Water in St. Petersburg
RssMail

The Shape of Water in St. Petersburg 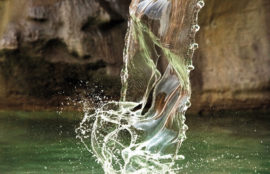 Nicknamed the “Venice of the North” for its canals, rivers and bridges, St. Petersburg has had a close bond with Italy since it was first built on the Neva River.

Peter the Great, envisioning a capital for his empire that could compare to the great capitals of Europe, invited the Swiss-Italian architect Domenico Trezzini to develop a plan for the city and design its first churches and government buildings in the baroque style.

It’s fitting, then, that a Swiss-Italian photographer’s images of the fountains at Peterhof Palace — Peter the Great’s summer retreat — are now on display at the city’s Imperial Academy of Arts.

Claudio Koporossy calls water his “magnificent obsession.” He travels the world to find historic fountains and monuments, capturing the dance of water with the click of a camera shutter.

“Russian Water,” Koporossy’s new exhibition in St. Petersburg, includes one room of photos taken at Peterhof Palace this June and another room featuring his photography of fountains from around the world.

His photos from Peterhof subvert expectations. The palace’s historic fountains, typically the main attraction, instead appear out of focus or in the background. In one image, a golden statue of the Biblical figure Samson — a character known for his strength — is dwarfed by two gushing columns of water.

“When I started taking these pictures,” Koporossy told The Moscow Times, “I started seeing things the eye doesn’t see. You develop a different way of looking at things, the same way as when I was young and I started computer programming. With programming, you start to think in programming — it modifies your way of thinking. The same thing happened with my photographic eye.”

As a result, his photos capture water’s motion and clarity in ways that can’t be seen with the naked eye.

“Water moves fast, so you have to photograph it quickly,” he said. “When you look at a cascade of water just pouring down, you have the impression that it’s linear and homogeneous, but in fact it’s not at all. It goes left and right and up and down.”

He began his career photographing “still life” compositions of fruit and flowers about 10 years ago, enjoying the freedom it gave him away from human subjects. Koporossy first incorporated water into his photos while photographing fruits and vegetables on Italy’s Amalfi coast.

“Then in Rome, I started taking more pictures of water and realized I needed to make them better and also to understand what to take a picture of. I believe a photo is like a painting: It has to have harmony and equilibrium. It’s important when you take a picture to think about how it’s set up, the balance. I don’t think about anything else.”

“What I like about Koporossy is the fact that his goal does not seem to need either philosophies or excessive narratives and theatricalizations,” art historian Marco Di Capua wrote. “[He generates] a whole declination of gestures, movements and attitudes that water can produce when it is physically small but poetically capable of evoking immense scenes — with a particular passion for the jet, the roar, the eddy, the gush, the flow, the reel, the vortex, the fall line, the bow.”

“Russian Water” is on display through Oct. 30. Admission is free.