The Ten Best Children’s Books of 2017 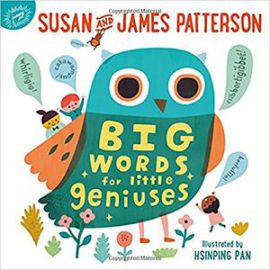 When illustrator and children’s book author Oliver Jeffers became a father, the Australian-born, Belfast-raised, Brooklyn transplant felt the immediate need to explain the world to his son. He manages to do this, in his latest book, Here We Are, in a simple way that belies the sheer magnitude of the task.

The story reminds us that the children’s books that come out in any given year mirror the issues and goings-on that adults, too, are processing. As a mother myself of two young daughters, my favorite picture books from this year encourage environmental responsibility, tolerance, and female empowerment, all issues that have been raised by news from the headlines. In reading these with children, we hope that they gain a better understanding of the events around them, and that we may, in turn, be able to see the world through their eyes.

James Patterson is a titan in the publishing world, with nearly 150 novels to his name, including a Guinness-World-Record-holding 67 #1 New York Times bestsellers. Now, his wife, Susan Patterson, is joining the game. The two have written an alphabet book that doesn’t underestimate kids’ abilities to learn new words. Sure, “A is for apple,” but it’s also for arachibutyrophobia (the fear of peanut butter sticking to the roof of your mouth). And B is for bibliomania—the mission of James’s fledgling children’s book imprint, JIMMY Patterson, is to turn as many kids into bibliomaniacs as possible. The couple clearly had fun with it. No sooner do they get to Zamboni, and they’re at it again, in a quick glossary from “adamantine” to “zoosemiotics.” The funny-sounding, multisyllabic words take hold in little ones’ minds as much as they twist around their tongues. Warning: The book has my three-year-old calling her grandmother a flibbertigibbet. 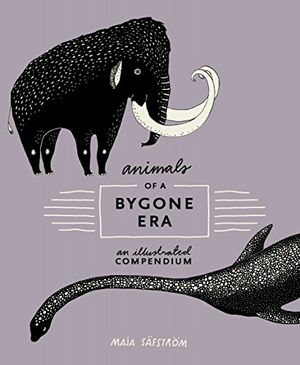 Animals of a Bygone Era: An Illustrated Compendium

The wacky creatures that live in Swedish artist Maja Säfström’s new book, Animals of a Bygone Era, look like the fictional ones that take shape in kids’ doodles. Only hers were real, once. The book features more than 50 extinct animals, illustrated and annotated with curious facts about their anatomies and behaviors. Säfström lays one ground rule early: “Dinosaurs have intentionally been left out of this book to give some attention to other fascinating—but less famous—creatures that once lived on this planet.” Horned gopher? Giant Siberian unicorn? Terror bird? Yes please. 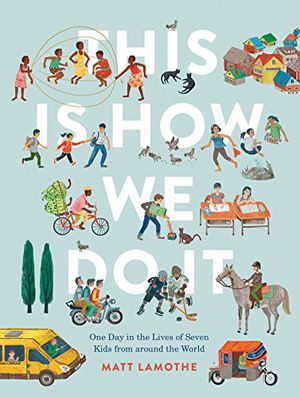 This Is How We Do It: One Day in the Lives of Seven Kids from around the World

Matt Lamothe’s lesson in tolerance is brilliant in its simplicity. The Rhode Island School of Design grad and partner in the company ALSO reached out, through friends and family, to seven children around the world, ages 7 to 11. He asked them to provide photos and information about their typical day, from what they eat at breakfast to how they get to school, their chores, and where they sleep at night. From what he gathered, Lamothe wrote and illustrated This Is How We Do It, a side-by-side comparison of the kids’ experiences. Simply put, in his author’s note, he writes, “I believe the more you learn about different people, the more you see yourself in them, and the more accepting you become.” It’s refreshing to watch your child realize that she dresses a lot like 9-year-old Kei from Tokyo and helps to care for her baby sibling like 7-year-old Kian from Gorgan, Iran. 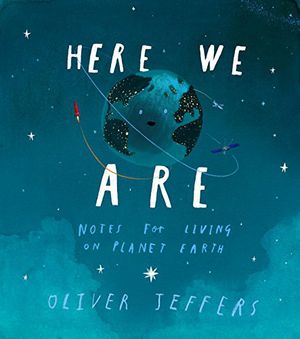 Here We Are: Notes for Living on Planet Earth

Two years ago, when Oliver Jeffers and his wife brought their newborn son, Harland, home from the hospital, the bestselling author and illustrator said, “Here we are.” Little did he know that would become the title of his newest book, which explores the mind-bending and sometimes overwhelming responsibility of parents to explain the world to their children. Here We Are begins with the macro, diagramming where Earth is in our solar system, and how we spin around the sun and the moon spins around us. It goes on to impart sage advice about taking care of one’s body. “Look after it,” he writes, “as most bits don’t grow back.” (Off to the side, in a simple illustration, are the exceptions: nails and hair.) The book makes a great gift for new parents, who will undoubtedly relate to the sweet story. 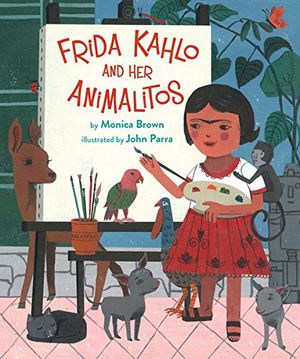 Frida Kahlo and Her Animalitos

Award-winning author Monica Brown’s latest book transports readers to La Casa Azul—the birthplace, longtime residence and now house museum of artist Frida Kahlo in Mexico City. It was here in this bright, cobalt-colored home that Kahlo painted, in the company of oodles of pets—dogs, a cat, monkeys, an eagle, turkeys, a fawn and a parrot named Bonito. Brown, a professor of Latino and multicultural literature at Northern Arizona University, recognizes kids’ interest in fuzzy and feathered animals, and leads with them, describing Kahlo in relation to her animalitos. “Like her parrot, Frida was colorful,” Brown writes. “Like her fawn, Frida had watchful, beautiful eyes.” Publishers Weekly notes, “Even if readers don’t get much of a sense of the work Kahlo created, they’ll finish the book feeling like they know the artist.” Plus, in her author’s note, Brown provides the titles of paintings that include Kahlo’s pets, so parents and kids can dig deeper. 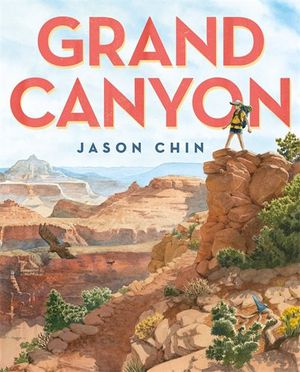 Author and illustrator Jason Chin has made California redwoods, coral reefs and the Galapagos the subjects of picture books. In his latest, he turns his detailed gaze to the Grand Canyon. Informed by extensive research, interviews with scientists, and his very own hike to the bottom, Chin’s story follows a dad and daughter on a 22-mile trip from an Inner Gorge campsite to the South Rim. The amount of geology, ecology and paleontology he packs in—diagramming the rock layers and their ages, and adorning the borders of his pages with native species, like the spotted sandpiper, desert willow and flame skimmer dragonfly—is impressive. 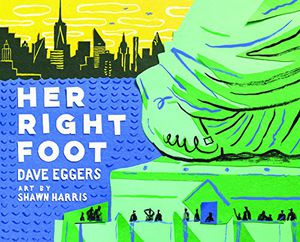 It was a on a family trip to the Statue of Liberty in 2015 that author Dave Eggers first noticed the figure’s right heel is lifted. “There was already a lot of anti-immigrant rhetoric floating around then, and the Statue of Liberty’s position of action and welcome—striding into the sea to meet new arrivals—struck me as crucial to remember,” he told the San Francisco Chronicle earlier this year.

In Her Right Foot, the writer begins with the familiar story of the French gifting Lady Liberty to America, doling out facts—like how she was packed up in 214 crates and shipped to New York City, and how the seven spikes on her crown symbolize the seven continents and seas—that will get kids’ minds swirling. Then, he draws attention to her foot. “She is going somewhere! She is on the move!” Eggers writes. And, at a critical time, he explains why this detail is so important. “Liberty and freedom from oppression are not things you get or grant by standing around,” he adds. “These are things that require action. Courage. An unwillingness to rest.” 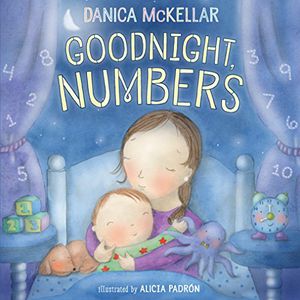 It’s fun when a child realizes that shapes are everywhere. A similar eye-opening experience can happen when he or she recognizes numbers—of fingers, wheels, apples, anything—in the real world. It’s this exercise of counting objects in one’s own environment that drives Goodnight, Numbers, by Danica McKellar. The author, who played Winnie Cooper in the 1980s and ’90s TV series “The Wonder Years,” among other acting credits, has a degree in mathematics from UCLA and a passion for math education. Her rhythmic read counts from one to ten, providing opportunities for parents and kids to spot one dog bone, two cups, three buttons and four turtles on its pages. 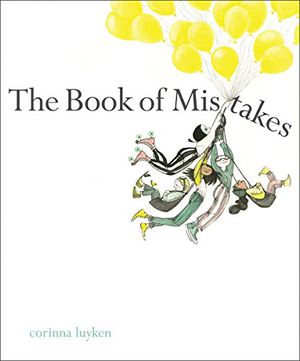 The Book of Mistakes

Corinna Luyken shares an encouraging take on the creative process in The Book of Mistakes. The story follows the first-time author-illustrator as she draws a picture of a girl. The image grows and transforms as she compensates for one mistake—a lopsided eye—after another—an extra-long neck. When there’s too much space under the girl’s feet, she adds roller skates. And the “frog-cat-cow thing” gets filled in, becoming a rock. The mistakes take her down a different path, but one that’s ultimately beautiful. Luyken, who attributes the idea for the book to her “many, many mistakes,” certainly delivers this lesson in a lovely way. 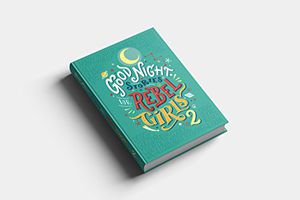 A healthy crop of empowering books for girls has sprung up in this current political climate, from Chelsea Clinton’s She Persisted to Vashti Harrison’s Little Leaders. My favorite is Goodnight Stories for Rebel Girls 2. Authors Francesca Cavallo and Elena Favilli raised $866,193 from more than 15,000 backers on Kickstarter to publish the sequel, smashing the previous crowdfunding record for a children’s book set by their original Rebel Girls. This installment tells the tales of 100 more women, from Ellen DeGeneres, Sojourner Truth and Nefertiti to a lesser-known ice diver, a mail carrier and an eagle huntress, all illustrated by women, of course.

The Ten Stories You Didn’t Read in 2017 But Should HaveGone at 27 and Eternally Youthful For the Ages, Jimi Hendrix Would Have Been 75 This Year