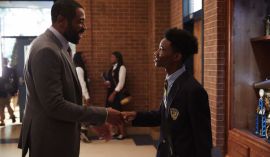 The night of the “Black Lightning” world premiere kicked off with a star-studded “red carpet” event—the carpet was actually black, in honor of the show, dappled with little yellow lightning bolts and bearing the title in large block capitals. It was the evening of Saturday, January 13, the start of Martin Luther King Jr. Day weekend; the venue was the Smithsonian’s National Museum of American History. The culmination of two days’ worth of “DC in D.C.” comics-themed festivities (the bulk held at the nearby Newseum), the rollout of “Black Lightning,” whose African American title character first appeared in DC comics 40 years ago, occasioned wide smiles from the gathered VIPs and guests.

A coterie of cast members and others associated with the production gradually made their way down the line of clamoring reporters and photographers, obligingly fielding questions on their roles in “Black Lightning” and striking dramatic poses for the cameras. Everyone was in high spirits, and understandably so. The character of Black Lightning is the first African American superhero ever to have his own live-action television program (readers may remember the animated Static Shock cartoons of 2000-2004), and the show aims to tackle serious social issues under the guise of electric action.

Black Lightning is the vigilante alter ego of Jefferson Pierce, a high school principal committed to seeing his disadvantaged student body overcome the lure of local gangs and succeed within the bounds of the law. His nighttime run-ins with the more dangerous of those gangs, as Black Lightning, is what spurred his wife Lynn to leave him. Their divorce, which takes place before the events of the pilot, leads Pierce to hang up his suit for good. . . or so he thinks at the time.

When his family is jeopardized in the first episode, Pierce has no choice but to become Black Lightning once more, taking to the streets and unleashing a mix of martial arts moves and zap attacks on those who stand in his way. Good and evil are not as clearly delineated as one might expect in a superhero show, though; young black gang members are a far cry from one-dimensional villains, and racist white policemen are nothing close to saviors.

Perhaps the most universally relatable aspect of the show will be the dynamics at play between Pierce, his ex-wife Lynn, and their two daughters, Anissa and Jennifer. “At the heart of it, it’s a family story,” says Cress Williams, who plays the lead role. “It’s kickass, it’s action, it’s all that, but it’s also a family story that everybody, no matter what race, can identify with.”

Family and community are themes that came up time and again on the black carpet. And not only in the context of the onscreen narrative. Across the board, the cast of the show had nothing but admiration for one another, and all seemed humbled and grateful to have gotten the chance to work as a group.

Of the undeniable chemistry between China Anne McClain and Nafessa Williams, who play sisters on the show, Williams says “it was one of those bonds that happened instantly–like, in our auditions. We knew it’d be really easy to play opposite of each other.” This sense of natural camaraderie extends to the whole group. “We’ve been having fun,” Williams says. “We’ve all moved to Atlanta together to film this show, so we get to spend a lot of time together, and really connect and allow that to translate onscreen.”

Marvin Jones III, who portrays the diabolical kingpin Tobias Whale on the show, was perhaps the most effusive of all. Likening the “Black Lightning” gig to an opportunity to shoot hoops with a “championship coaching staff and teammates,” Jones says he’s “honored and very, very grateful” to be a part of the pioneering project. “It’s been an incredible journey and experience” putting the first season together, he says. “We’re all a big family. Even me as the villain, I’m very much still family.”

After the black carpet procession had made all their rounds, the open bars stowed their drinks, and the hors d’oeuvres platters disappeared for good, everyone in attendance gamely made their way past the newly installed Batmobile and to the museum’s Warner Brothers Theater, where the pilot of “Black Lightning” was to be shown for the very first time.

The screening was a hit with the assembled crowd, who stood from their seats to applaud the team’s work as they massed onstage after for a brief Q&A session. Underlying the discussion was strong pride in what the group had collectively achieved: the birth of an exciting, socially conscious story of African Americans, by African Americans, and for just about everyone.

In his introductory remarks, Peter Roth, president of the Warner Brothers Television Group, captured the spirit of the moment perfectly. “Forty years ago,” he said, “inspired by Dr. King, the character of Black Lightning was created. Now, we all know that Black Lightning is a fictional superhero. But the ideals of the real-life hero Dr. King—hope, love, respect, equality, freedom—these are the ideas we hope will resonate most as you watch this seminal series.”

“Black Lightning” airs at 9:00 PM Eastern Time on the CW every Tuesday. In case you missed this week’s pilot, an encore will be shown on Friday the 19th at 8:00 PM Eastern.