Culture | These Origami Clothes Grow With Your Child
RssMail

These Origami Clothes Grow With Your Child 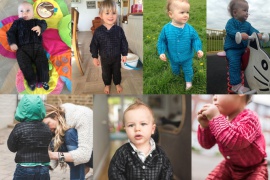 One of the most surprising things about having a baby was how fast he grew out of his clothes. I mean, obviously I knew that babies got bigger. But he was like the Incredible Hulk, busting out of his tiny panda-print onesies in two weeks. My husband and I joked about just wrapping him in a towel until he was one.

“My sister had just had a baby, and as a present I had bought him some clothes, but by the time I had managed to give them to my sister, the baby had already outgrown them,” he says. “This was a massive inspiration for me, and I started to think ‘how can I solve this problem?’”

At the time Yasin was studying at the Royal College of Art in London, and had recently spent time in Japan. He’d been struck by the avant-garde fashion scene there, with designers like Issey Miyake using mathematical principles to make garments that were three-dimensional, as much sculpture as clothing.

“I started to think, how can clothing be a dynamic object rather than a static one?” Yasin says.

That was the beginning of Petit Pli, Yasin’s new line of origami-inspired children’s garments that grow with the wearer. A Petit Pli garment can fit a child from about three months to three years thanks to 3D stretchable pleats. Yasin hopes the garments can help cut down on waste and pollution, a notorious effect of the textile industry, as well as save parents money. He also hopes they will help give children a mindset of sustainability and reuse at an age when they’re just learning about the world.

The invention has won 24-year-old Yasin a national James Dyson Award. The $2,500 award goes to a student designer or engineer who produces an innovative product design created with sustainability in mind. Yasin is now in the running for the international award, announced at the end of October, which carries with it another $40,000.

Yasin used his undergraduate degree in aeronautical engineering to design the garments, which are inspired by both origami and the structure of satellite panels. The garments are made with pleats that give them an auxetic structure, meaning they expand widthwise when stretched lengthwise. His first prototype—one of more than 500—was a pair of pants Yasin baked in his home oven to set the pleats. They fit both his newborn nephew and his 2-year-old niece.

The design process presented plenty of challenges. Certain fabrics didn’t work. Dyes were tricky. But, finally, Yasin had a prototype. He gave the garment to parents to try, and quickly learned something he’d never considered: many parents don’t want to put synthetic fabrics next to their children’s skin.

So Yasin changed tacks. He decided to focus only on outerwear. This turned out to have benefits, Yasin says, in that he could also make the garments windproof and waterproof. He took other parental feedback into account, adding a pocket and making the pleats on the garments face downwards, like roof tiles, so spills and crumbs slide off.

The look of the resulting garments is one part Japanese avant-garde, one part medieval armor. They can be shoved in a suitcase without wrinkling and washed in the washing machine without losing their pleats.

Winning the national Dyson Award was “a massive shock,” Yasin says, but he was delighted. He’ll use the prize money for research and development, in the hopes of bringing Petit Pli to consumers soon.

“I want to get Petit Pli into the hands of as many people as possible, perfect it and then bring the product to market,” he says. “But more than that, I’m very keen to continue merging technology with fashion and find ways to enhance our human abilities through clothing: our second skin.”