Culture | Thought Lost to History, These Rare, Early Films Survived Thanks to a Crafty Showman and a Savvy Collector
RssMail

Thought Lost to History, These Rare, Early Films Survived Thanks to a Crafty Showman and a Savvy Collector 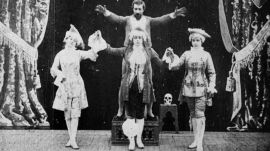 In the southern and eastern part of Iowa sits the town of Washington, population 7,424. Its picturesque town square and brick storefronts, not to mention its location in the heart of the American Midwest, make it seem like your ordinary small town. It’s anything but. Washington’s State Theatre, formerly an opera house, showed its first motion picture to an astounded crowd on May 14, 1897, making it, according to the Guinness Book of World Records, “the oldest continuously operating cinema theatre in the world.”

Beyond that, the theater holds a never-before-told piece of film history, one that is the subject of a new documentary by filmmakers Tommy Haines, Andrew Sherburne and John Richard. “Saving Brinton” is an enchanting 90-minute documentary that tells the story of a collection of 130 early nitrate films—including two once believed to be lost by the great French illusionist and pioneering filmmaker Georges Méliès—and the local character who discovered them and saved them from oblivion.

How did these cinematic treasures end up in rural Iowa? To understand that one must first understand how movies usurped live theater as America’s most popular form of entertainment.

Between the end of the Civil War and the Great Crash of 1929, tens of thousands of “opera houses” were built across the country, including hundreds in the state of Iowa alone. Rather than staging full-blown operas, they mostly served as community cultural centers where local groups and guilds could convene and traveling actors, singers, orators, musicians, magicians and the like could stage a show.

Troupes of traveling performers often stayed in the community for weeks, mixing with the locals. As one native Iowan said in 1940, harking back to the heyday of the “opera-house circuit” in the late 19th century: “Our romantic hero and heroines walked our streets, breathed our air, ate our food. They were not strips of celluloid packaged tightly in tin boxes shipped to us from across the continent.”

That all changed with the miracle of moving pictures. In 1892, Frenchman Léon Guillaume Bouly’s invented the Cinématographe, which both captured and projected moving images. Film’s rise from novelty to artform was meteoric. The evolution from Edison Studios’ 1895 The Execution of Mary Stuart (running time: 18 seconds) to Charlie Chaplin’s first feature film, 1921’s The Kid (68 minutes) is breathtaking, both technologically and narratively. By the time the Great Depression hit, thousands of “opera houses” across the country had become “movie houses,” offering Americans an inexpensive escape from their economic woes.

Washington’s State Theatre was one of the earliest to show motion pictures on a regular basis. This was almost entirely due to the brilliant and enterprising W. Frank Brinton, the Brinton of the documentary’s title, a wealthy farmer’s son who devoted his life to various inventions—including failed early flying machines—but had his greatest success photographing and projecting early motion pictures.

In 1897, Frank and his wife, Indiana, transformed Washington’s opera house into a thriving cinema where films played to sold-out houses. Their success was so great that they decided to take it on the road. The Brinton Entertainment Co. traveled from Minnesota to Texas projecting light through hundreds of early films from as far away as Europe and the Middle East, as well as hand-painted “magic lantern slides,” dazzling audiences who had never seen such wonders. Local and traveling musicians were hired to accompany the films, making them anything but silent. And by all accounts, they were a great success. At the height of their business, such shows could bring in more than $100 a day—about $2,500 in 2017 dollars.

Frank died in 1919 and eventually the entire Brinton collection—including the early films, hundreds of slides, catalogues, handbills, ledgers, posters and the original hand-cranked projector used by Frank and Indiana—was locked away in an Iowa basement, forgotten to the world.

Enter Michael Zahs, a gentle man with a long, wispy beard and more onscreen charm than most leading men. Now in his 70s with the air and appearance of a latter-day Walt Whitman, Zahs, who calls himself a “saver” rather than a “collector,” discovered the Brinton collection at an estate sale back in 1981, much of it in boxes labeled “Brinton crap.” Despite the labeling, he immediately recognized the artistic and historical significance of the collection.

Part of the collection was preserved by the American Film Institute in the early 1980s and deposited at the Library of Congress. But the great majority of the collection never found a home, so Zahs made room for it in his family home—a lot of room, much to his wife’s dismay—and continued to spread the word to film historians, museums and search for a curator.

His search ended a few years ago, when curators at the University of Iowa Libraries learned of the collection. One of Zahs’ stipulations was that the entire Brinton collection remain the property of the people of Iowa. In 2014, that stipulation was agreed upon, and Zahs gifted the entire collection to the University of Iowa Libraries, Special Collections, where it is being catalogued, preserved and digitized, and will eventually be available in its entirety for public viewing and scholarly research.

Throughout “Saving Brinton,” the documentarians highlight the painstaking process of restoring these films; the results are spectacular. Among the 130 films are early masterpieces by Auguste and Louise Lumière, Ferdinand Zecca, and Segundo de Chomón, many of them meticulously hand-painted, frame by frame, in brilliant colors.

But by far the greatest find has been the two lost Méliès films: The Triple-Headed Lady (1901) and The Wonderful Rose Tree (1904). Both are stunning examples of Méliès surreal narratives and use of stop-action to create some of the first “special effects.” The earlier Méliès film features prominently in “Saving Brinton.” But the latter, “The Wonderful Rose Tree” was restored so recently that it didn’t make the final cut of the documentary—and so will have its world premiere Oct. 7 at the Pordenone Silent Film Festival in Italy.

Yet thanks to Zahs, after a recent screening of “Saving Brinton” at the State, I—along with 300 or so other audience members—saw “The Wonderful Rose Tree” blossom on screen for the first time in perhaps 100 years. “Just let yourself be wowed,” Zahs said, serving as a kind of spiritual tour guide: “It’s OK to be wowed.”

There was a sense of magic in the crowd—a feeling that we had somehow transcended time. That we—watching the images flicker on the screen, the roses magically appear and disappear before us—were experiencing the same wonder, joy and dreamlike state felt by tired farmers, blacksmiths, hired hands and their families seeing the same images over a century ago.

It’s clear throughout “Saving Brinton” that Zahs’ love for the Brinton collection is surpassed only by his love for family and community. What’s remarkable about this delightful film is how it weaves the narrative of Zahs’ life—his deep roots in Iowa and his devotion to the land and its people—into the story of Frank and Indiana Brinton. and the magic that was—and is—early movie making.