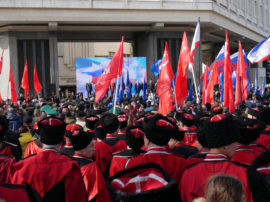 Thousands of people marched in Crimea’s capital city of Simferopol on Friday in an event staged by Moscow-backed authorities to mark the fifth anniversary of Russia’s annexation of the peninsula from Ukraine.

While participants waved flags and sang songs of celebration, many of them told The Moscow Times that the dramatic increase in living standards they experienced after Russia took control has since then all but disappeared.

The parade, led by top Russian officials, kicked off a four-day-long series of events set to culminate on Monday, celebrating what organizers call “Crimea’s reunification with Russia” and “the Crimean spring.” 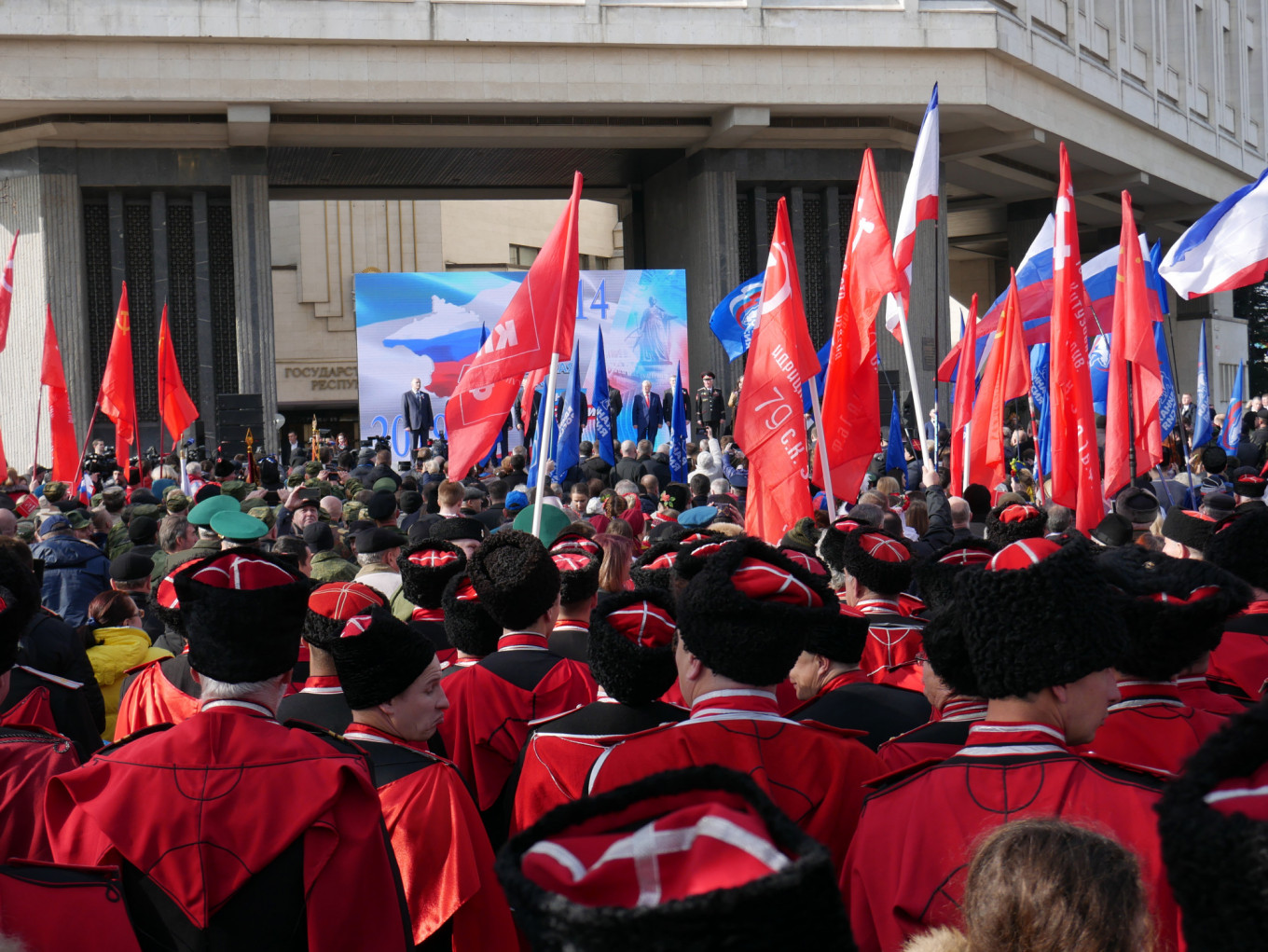 Hundreds of Cossacks from southern Russian participated in the events Friday. The Moscow Times

“Five years have passed and the situation has stabilized, people are now adapting to their new environment and its new laws and political culture,” said Tatiana Senyushkina, a political scientist at the Crimean Federal University.

She cited mass Russian investment into infrastructure projects including a $3.6 billion road-and-rail bridge linking Russia and Crimea, a new highway network and a new airport as having increased living standards and incomes across the board.

Moscow took control of Crimea on March 18, 2014, two days after a referendum staged by local authorities said 97 percent of voters supported the move. The vote was condemned by Ukraine and the international community as illegal and resulted in several waves of economic sanctions against Russia and Crimea’s Russian-backed authorities.

“There was a major improvement at first and our pensions grew so much that we didn’t know what to do with so much money…then slowly the prices started to increase on utilities and food, and our life standards basically returned to where they were before it all started,” said pensioner Lina Vasilyevna before Friday’s march.

“But we see what’s happening in Ukraine and we think: How good it is that we are far away from that!” she added. 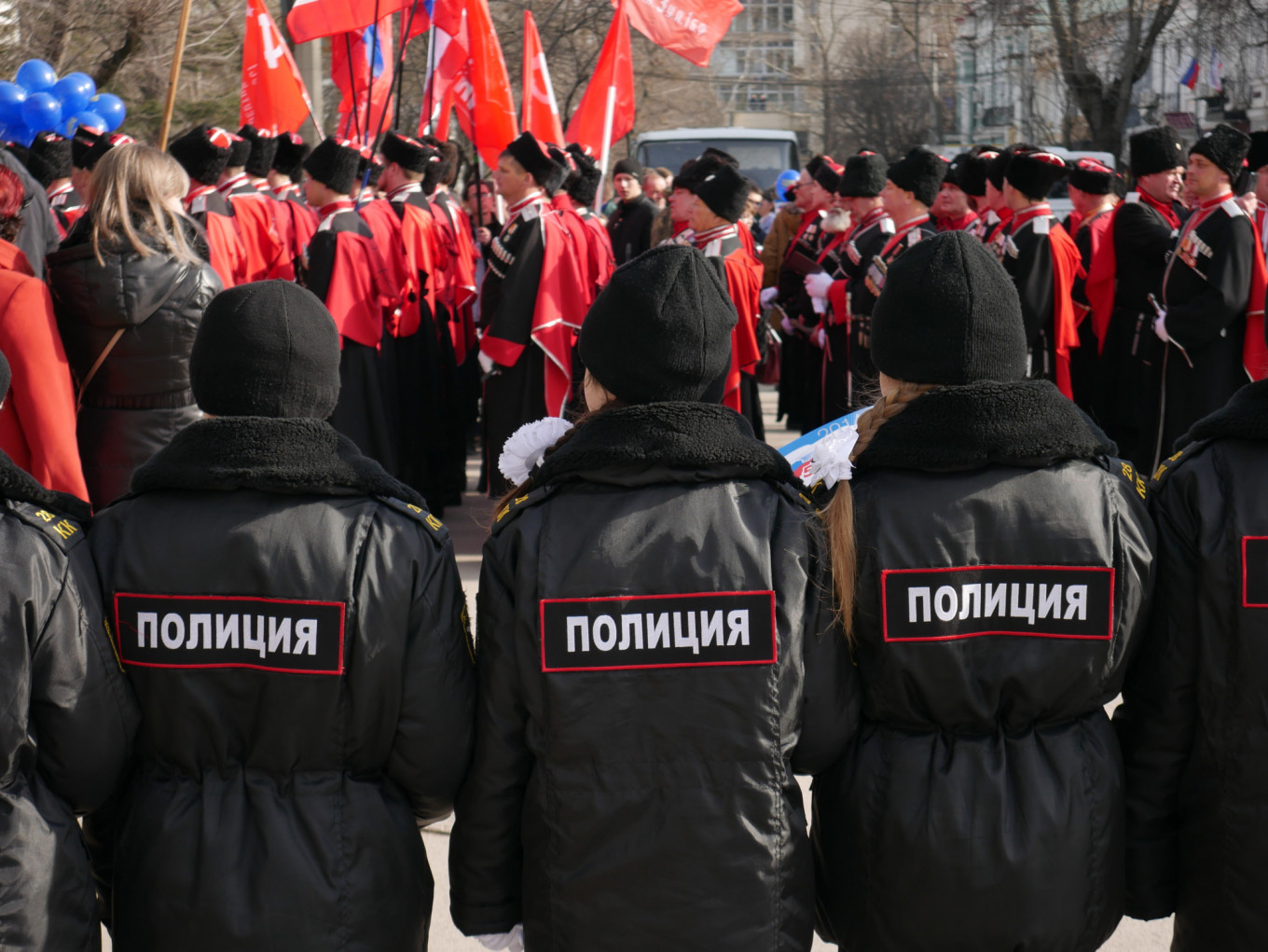 Young children dressed in police uniforms watch over the proceedings. The Moscow Times

Local authorities said as many as 7,000 people participated in the march through central Simferopol on Friday.

Participants waved Russian and Crimean flags and hundreds of people in the crowd wore Cossack costumes or military fatigues.

“Crimea will forever be Russian,” the crowds sang to the tune of a catchy pop song.

Marchers gathered at a stage outside Crimea’s parliamentary building to hear speeches from the leaders of Russia’s four parliamentary parties—including the firebrand head of Russia’s nationalist LDPR Party, Vladimir Zhirinovsky—as well as top officials from the peninsula’s Moscow-backed administration.

Alexei Yuriev, a 55-year-old Simferopol native waving a flag at Friday’s march, was among the first pro-Russian activists to gather in February 2014 to advocate for Crimea joining Russia. He said his lot in life has worsened since the annexation and that there are not enough doctors at his hospital, but he says he’ll “never” regret that Crimea became part of Russia.

“We need much more investment in the economy, but we have to realize that we’re part of one family now with Russia so it would be selfish to only think about ourselves,” he said. 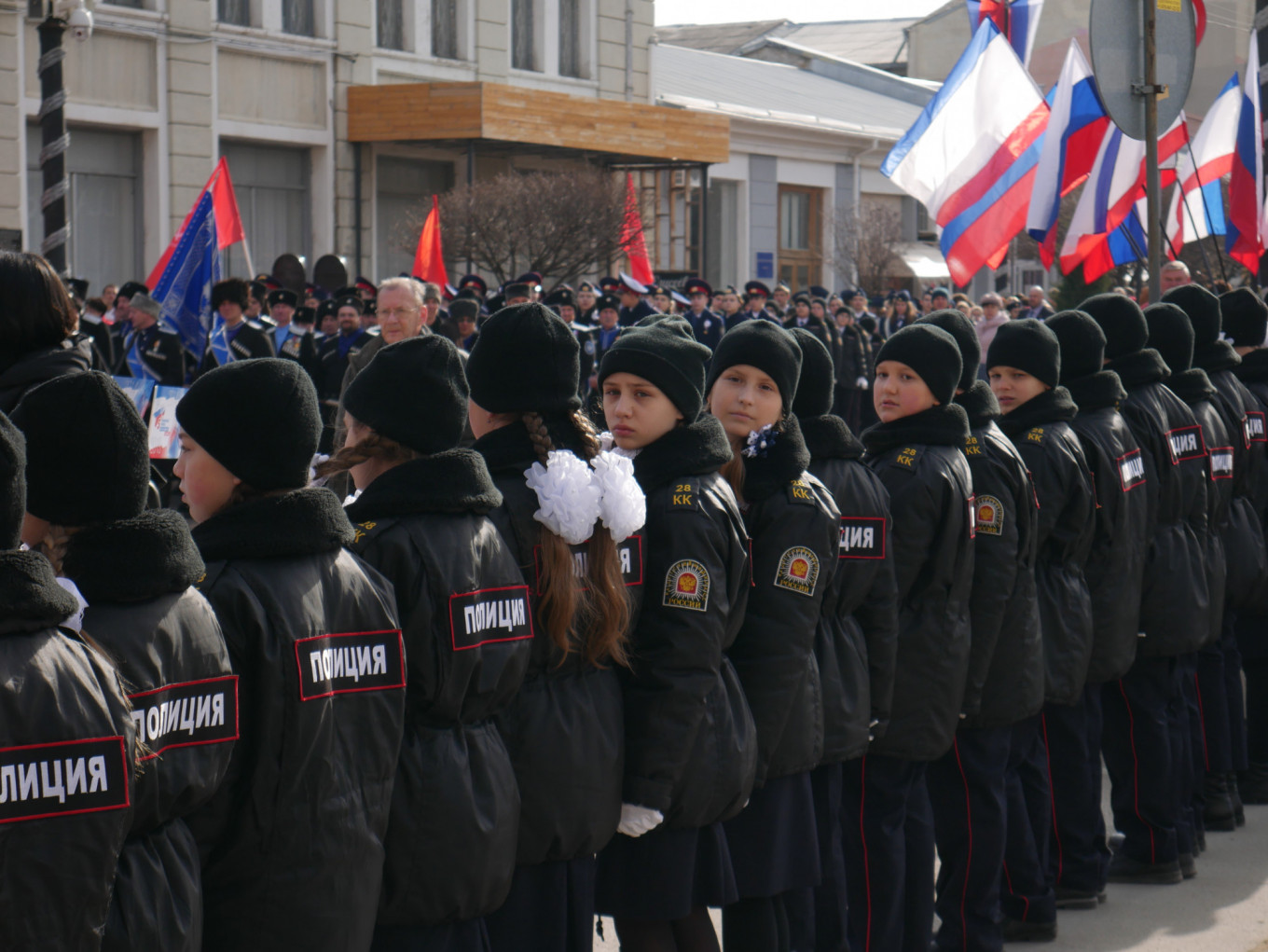 Other events celebrating the anniversary over the weekend include a parade led by the pro-Kremlin Night Wolves motorcycle gang, a show of military equipment in Sevastopol, patriotic lectures organized for schoolchildren and an awards ceremony for activists who participated in the takeover.

President Vladimir Putin, whose popularity was significantly bolstered by the March 2014 annexation according to opinion polls, is scheduled to participate in the celebrations.

“One thing can be said for sure: The fifth anniversary of the reunification of Crimea with Russia is a very important date for all Russians, so there should be no doubt that Putin will participate in the events,” the Kremlin’s spokesman, Dmitry Peskov, was cited as saying by the state-run TASS news agency Wednesday. 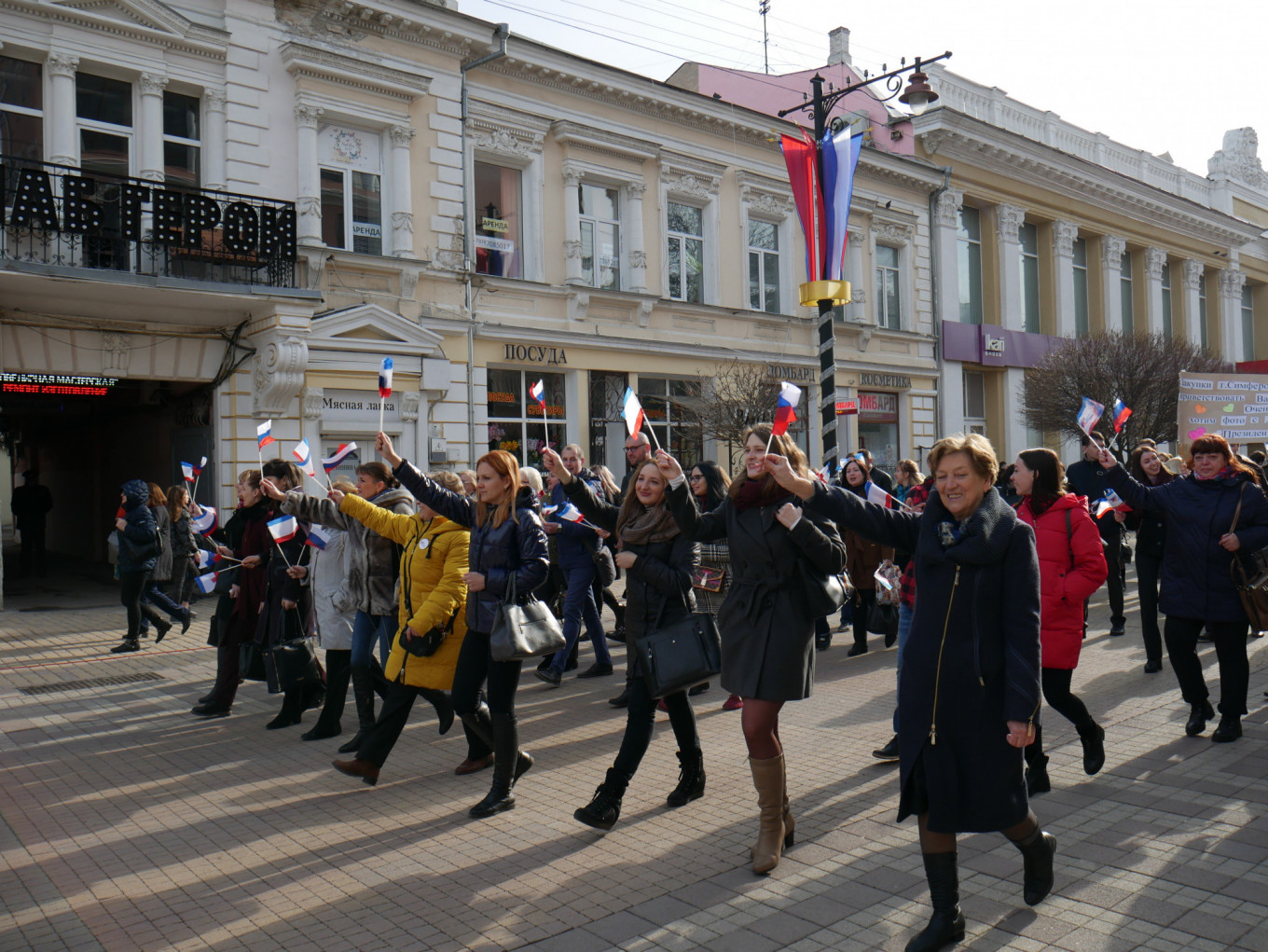 The president’s visit may coincide with the opening of two new power stations in Crimea, Reuters cited sources with knowledge of the matter as saying earlier this week.

Back at the rally, Lyubov Alexeevna, a 56-year-old retiree from the city of Bakhchisaray, said not much has changed in her life since the annexation in a material sense.

“But it’s as if there is now a ray of light that gives you hope,” she said.

“When we were part of Ukraine, everything seemed hopeless.”