Culture | Tom Sawyer Fest: From the Mississippi to the Volga
RssMail

Tom Sawyer Fest: From the Mississippi to the Volga 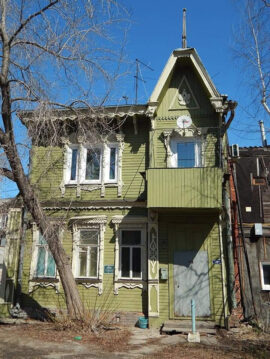 If you’ve read the book “The Adventures of Tom Sawyer” by Mark Twain, you remember how Tom Sawyer’s aunt made him paint the fence as punishment. But Tom made it seem like so much fun that his friends wanted to paint it for him while he went off and played.

Inspired by this episode, the Tom Sawyer Fest was begun in Samara in 2015 by Andrei Kochetkov, a local journalist. He and his friends wrote about the poor conditions of the city’s historical structures for years to no avail. So they decided to paint them themselves. The buildings they fixed up were then restored by the city and became the Tom Sawyer Fest’s first project.

Since then, activists have restored more than 80 old houses in more than 40 Russian cities, towns and villages. They clean and stucco, replace doors and windows, repair roofs and do anything else that needs to be done, all funded by sponsors, crowdfunding, subsidies or grants. The activists of Tom Sawyer Fest usually restore residential apartment buildings. All projects are coordinated with the local administrations.

“We have groups in VKontakte [the Russian social media platform] where everybody can find out about the festival in his or her city. We welcome everyone, irrespective of experience. Facilitators have mastered the art of assigning tasks based on the skills of every person who comes and wishes to help. Someone might know how to use an angle grinder, another likes to paint, a third bakes wonderful pastries and a fourth person knows how to clean wooden floors. For example, in Kazan, we worked with a 80-year-old woman who cleaned facades. There are volunteers of different ages and skills,” Kochetkov told The Moscow Times.

All the cities and towns that join the Tom Sawyer Fest have facilitators who get together every once in a while in Samara to share their experience with newcomers and take courses with experts in restoration.

The Tom Sawyer Fest usually starts in early spring and lasts until mid-fall, but this year it changed its work due to coronavirus lockdown. The festival only began at the end of July in Samara with the restoration of the facade of the wooden building on Ulitsa Bratyev Korostelyovykh. Then they’ll work with the Samara Grid Company to renovate a modernist transformer substation — the first project of its kind.

Activists in Kazan were among the first to join the movement. They’ve renovated 15 houses, three of which are located in the historical district of Tatarskaya Sloboda. In the past volunteers were able to renovate several buildings in a season, but this year the coronavirus and problems with paperwork might delay work on the house once owned by local historian Ivan Pokrovsky.

The festival is also held in some villages. Svetlana Fomina and Oksana Baklushina are facilitators of the Tom Sawyer Fest in the Ivanovo region village of Kholui, which is famous its traditions of Russian icon painting and lacquer miniatures. It is the smallest settlement where the festival has ever taken place — the population is only about 800 people.

At first the organizers had a hard time explaining the concept of the festival and finding volunteers, but they group now knows that each city or town has its own problems. In 2019, activists organized an exhibition of works by artist Anatoly Semyonov and then renovated his house. This year they want to renovate the house of miniaturist Pavel Ivakin, who created more than 40 works depicting historical subjects, fairy tale epics and modern themes. Today a librarian lives here.

There are another communities where work has already started this year. In fact, in Kaluga activists have already finished restoring a 19th-century house. Five new communities have joined the festival, including the village of Pribytkovo outside St. Petersburg.

But Anastasia Rytova, one of the facilitators of the festival in the village, says that they began this work earlier. A native of the nearby Gatchinsky district, one day she drove into Pribytkovo and the local residents asked her help to renovate the former dacha of Pribytkov, the village’s founder and first dacha owner.

The three-story building was created at the turn of the 20th century and it is one of the best examples of wooden “style moderne,” Russia’s version of art nouveau. The house had unusual architecture and stained-glass windows that were made, according to legend, to sketches by the artist Mikhail Vrubel. Today the building is used as a library, but it has an exhibit telling about the history of dacha “style moderne.”

Rytova knew one of the people who had inspired the festival in St. Petersburg and asked him to look at the house. And that’s how the Tom Sawyer Fest started in Prybytkovo. Last year the roof was repaired, the stained-glass windows were removed and put into storage, and a company agreed to restore them. This year at the end of July, renovation of one of the house’s facades began. At first, activists wanted to renovate all the facades this year, but since they started late in the season, they expect to finish next year.

“We hope that after the dacha is restored, we’ll have more tourists in Pribytkovo. Maybe then we can move on to renovate buildings in the nearby village of Vyritsa, but we don’t want to make long-term plans,” Rytova said.

Kochetkov adds that this year volunteers are coming back to work with the Tom Sawyer Fest. “It’s nice to see changes for the better that take place in your hometown, especially when you are involved in them. We don’t even mind having to wear masks and gloves — our volunteers always wear them to protect themselves from the dust.”