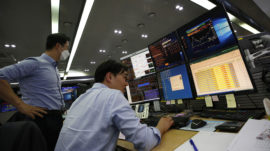 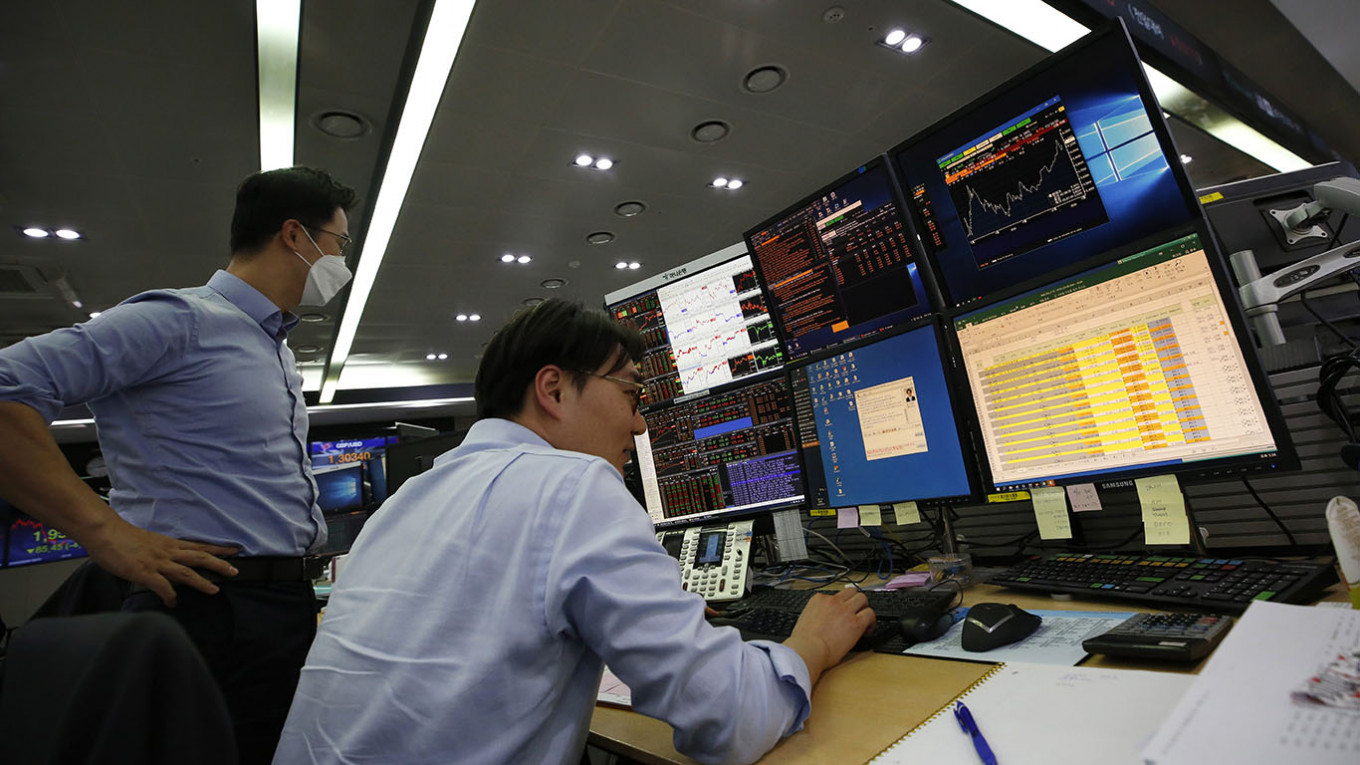 The Russian economy has been rocked by the coronavirus outbreak, and the breakdown of the OPEC+ oil production pact between Russia and Saudi Arabia. The turmoil has shocked traders around the world and resulted in sharp volatility on the Russian stock markets and swings in the value of the ruble — both of which are down around 20% since the start of the year.

— The ruble flitted up and down throughout the day, but closed the Moscow trading session where it started — 80.5 against the U.S. dollar. This is around the levels last seen in the 2016 financial crisis and on par with the ruble’s weakest level against the dollar since it was redenominated in the wake of the 1998 financial crisis in Russia.

— Russia’s central bank announced more details on its measures to stop the collapse of the currency, stepping up its sales of foreign currencies — the logic being higher demand for rubles can keep its value up. The regulator also shared more details on how it will use the proceeds from the sale of its stake in Sberbank to Russia’s Finance Ministry to increase its ruble-buying program.

— Russia’s stock markets notched up one of its better days in recent weeks, with the RTS Index up 6%. News of measures to support Russia’s oil companies through the period of low prices helped energy companies score double-digit climbs.

— The Russian ruble remains at its lowest level in five years, having crashed through the benchmark rate of 80 against the U.S. dollar. Overnight the currency slipped as low as 82.7, before recovering slightly to 80.5 as trading in Moscow got underway. That marks a 32% depreciation since the start of the year.

— Traders don’t expect the currency to stabilize anytime soon. The ruble is already the worst performer this year, and the futures market has it as the second most volatile currency over the next three months, business site RBC reported Thursday. Against huge economic uncertainty, the U.S. dollar is now stronger than it has ever been, as calculated by its reading on the trade-weighted index.

— Russian stock markets, however, were stable at the open, with both the RTS Index and the MOEX Index showing little movement from Wednesday’s closing level.

— Nevertheless, the readings were only balanced by some big share price moves in opposite directions. Retailers such as Lenta and Magnit saw their share prices jump, while national airline Aeroflot shed another 7%. A poster child for the coronavirus hit, just one month ago Aeroflot was worth $2.2 billion, the latest plunge takes its dollar market capitalization below $750 million.

— The Russian ruble has fallen to its lowest level in five years, as the economic fallout of the coronavirus continues to weigh on the Russian financial markets. The ruble slipped to 79.8 against the U.S. dollar Wednesday evening in Moscow, putting the currency down more than 25% for the year so far.

— The plunge came as oil prices — which have a large impact on the Russian economy — also dropped to their lowest level since the 2014-16 price crisis. Brent crude was down below $27 a barrel. It started the year at $66.

— Russia’s dollar-denominated RTS index lost more than 9% Wednesday, while the MOEX Index, calculated in rubles, was down 3%.

— Analysts sharpened their assessments of how bad the economic costs of coronavirus will be around the globe. Deutsche Bank warned of “a severe global recession” with “declines in GDP growth … to exceed anything previously recorded going back at least to World War II.”

— Russia’s economic response to the crisis remains moderate compared to the huge rescue packages being outlined in the U.S. and Europe. All eyes are on a crucial meeting of the Central Bank on Friday in Moscow, as governor Elvira Nabiullina will weigh up how to respond to the economic turmoil, a falling currency and heightened inflation prospects.

— The ruble slipped heavily overnight, trading at 76.8 against the U.S. dollar Wednesday morning in Moscow. Analysts say the mammoth stimulus package unleashed by the United States and other developed economies around the world accelerated a rush into dollar-backe/p>ssets, with currencies of emerging markets suffering.

— The Russian stock markets were knocked back, picking up from a poor session in Asian trading, and taking the steam out of a bounce in the U.S. markets overnight. The RTS index was down more than 4% at the open, and the MOEX Index shed more than 1%. Russia’s national airline, Aeroflot, was one of the biggest fallers, with Wednesday morning’s tumble meaning the company has now lost half its value — around $1 billion — in the space of four weeks.

— The ruble’s woes were compounded as oil prices once again started the day in the red, with benchmark Brent crude falling close to $28 a barrel, setting a new low not seen since January 2016. “The pressure on the oil market has been relentless, [and] risks remain to the downside as we move into the second quarter,” said ING’s Warren Patterson. “The demand picture continues to deteriorate as more countries implement shutdowns and put in place travel restrictions which have seen airlines cut capacity. Meanwhile the pickup in oil supply from April following the breakdown of OPEC+ talks does mean that these weak prices are likely to linger for quite a while longer. Lower prices are clearly going to hurt oil exporting countries.”

— After picking up in the morning, the ruble slipped back to fall below the 75-mark against the U.S. dollar. A $1 bill would get you 75.2 rubles on the money markets Tuesday evening. The 1% daily fall would be big news on any number of other days, but following huge volatility over the last two weeks, traders might count today’s move as a sign of stability.

— The Russian stock markets also reversed their earlier upward trend, falling back in afternoon trading. The RTS index, denominated in rubles, was down 4.3% for the day and the MOEX Index dropped 2.8%. Construction group LSR fell more than 10%, followed by retailer Detskiy Mir and financial services group Tinkoff.

— Brent crude oil dropped back below $30 a barrel in Tuesday afternoon trading.

— “The situation remains tense, as the pandemic in Western economies has not yet passed its peak — and perhaps is the beginning,” said Sergei Suverov, analyst at BCS Premier. “Now the main question is whether the authorities will be able to help with large-scale anti-crisis stimulus to prevent mass bankruptcies.”

— Markets were subdued Tuesday morning, with the huge overnight moves which have characterized trading in the last few weeks failing to materialize. The calm comes after another bloodbath on Wall Street on Monday, where stocks fell 12% in the worst daily performance in 33 years. “The Federal Reserve’s emergency move Sunday apparently failed to impress markets Monday, with investors questioning the efficiency of monetary policy for fighting the virus outbreak,” wrote VTB Capital’s Maxim Korovin in his Tuesday research note to clients.

— The ruble gained almost 1% overnight, trading at 74 against the U.S. dollar.

— The Russian stock markets registered small but steady gains, reversing some of yesterday’s losses. The dollar-denominated RTS index was up 1.6% to 982 points in the first minutes of Tuesday trading, while the ruble MOEX Index climbed by the same extent, moving back above 2,300. Blue chips Gazprom, Sberbank and Sistema were top of the leaderboard.

— Brent crude oil also climbed overnight, hovering slightly above the benchmark $30 a barrel price which traders have fixed on since the collapse of the OPEC+ deal earlier March.

— The ruble fell again Monday, down 2.5% to start off the week, trading at 74.2 against the U.S. dollar. Earlier in the day, the currency fellow the benchmark level of 75 to the dollar.

— The Russian stock market also lost 5% as global stocks plummeted following an emergency rate cut from the U.S. Federal Reserve announced late Sunday. The RTS index, which is denominated in dollars, stood at 938 points (-5.4%), while the ruble-based MOEX Index was at 2,216 (-4.3%).

— Oil slipped to a fresh multi-year lows, with Brent crude falling 10% below $31 a barrel. Edward Moya, analyst at OANDA said: “Oil’s worst-case scenario seems to be coming true.  The coronavirus is paralyzing economies across the world and no-one has any clue how much worse it will get. You can basically start pricing a complete collapse in crude demand for much of the world.”