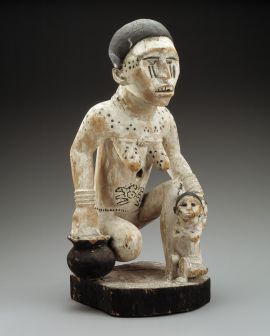 For more than three decades, the two-foot-high, mottled wooden sculpture of a female figure sitting with her baby across her lap, by a Mbembe artist in southeastern Nigeria, has been part of the collection of the Smithsonian’s National Museum of African Art, “celebrated as one of our greatest works from that side of Nigeria,” officials said.

But it wasn’t until the opening of the new presentation of the permanent collection, “Visionary: Viewpoints on Africa’s Arts” that it’s been reunited in the museum with its long-lost probable mate. The new acquisition, on view at the museum for the first time, of a male figure in a top hat and a gun is of the same height and style as the female, with similar inlaid oval eyes and pursed lips.

Together, the two weathered wooden figures, thought to be from the late 19th century to early 20th century, likely sat at either end of a massive slit gong, an instrument that served as kind of a tribal signal—sounded to call the Mbembe community together in case of fire, deaths, military attacks and other important events.

Their reunion in the new show is not necessarily a romantic one—the two sit in the museum as they probably did on the slit gong, with their backs to one another, as if cooling their heels following a domestic squabble. But for the museum, it’s worth celebrating having both figures together again, though 5,000 miles and an ocean away from their original home in Nigeria’s Middle Cross River region.

National Museum of African Art curator Kevin Dumouchelle says the museum wasn’t even sure that there was a missing half until the female sculpture was sent to New York’s Metropolitan Museum of Art a few years back and placed next to another that looked awfully familiar.

When it was paired with the male in the 2014 Met exhibition of Mbembe art, “It appeared at the time it might have been from the same time period,” Dumouchelle says. “But when we saw them together, it was clear these works likely were from the same slit gong.”

The existence of the male portion was not known because “it was in a private collection in Germany and really had not been widely published,” Dumouchelle says. “But the dealer who had sold them initially worked with the curator at the Metropolitan to build the collection, so she knew where it was.”

Accordingly, he says, “we were quite fortunate at that time to have a wonderful donor who acquired the male work from the collection from which it had been exhibited at that time and give it to us as a gift the following year, with the aim of being able to reunite this pair together.”

Unveiling the pair as part of the “Visionary” exhibition, Dumouchelle says, “we were quite pleased to show this reunited slit gong couple for the first time in this collection.”

Both are quite well-worn, because the gong “sat out in the open, and it was an object that was used, and as it got worn-down, it was replaced after time,” says the curator. “Part of the aesthetic appeal for these in the West is because they have this wonderfully worn tactile surface too.”

And while those in the West may “project our own romantic images on it,” Dumouchelle adds, in Nigeria, it was more utilitarian. “In the Mbembe community, once they’d get worn down, they would get replaced and changed over.”

So it’s somewhat rare to have the pair of well-used wooden sculptures that are so old.

“This one is probably 19th century,” he says. And though “it is quite rare for wood sculptures from Nigeria to survive, there are slit gong figures found that have dated from the 16th century.”

Together they provide a satisfying, if not entirely romantic, climax to the show, several years in the making, which is meant to choose 300 of the best items from the museum’s 12,000 item holdings and present them in several new contexts meant to frame and affect manner in which African art is experienced.

While the museum’s holdings are rich in jewelry, metalwork, painting, ceramics and costume, the signature image for “Visionary” is a recent painting by celebrated British-Ghanian painter Lynette Yiadom-Boakye of a modern woman looking through binoculars.

Recently the subject of an exhibition at New York’s New Museum, Yiadom-Boakye’s Womanology 12 may make some visitors think “Visionary: Viewpoints on Africa’s Arts” is a contemporary show of paintings.

But Dumouchelle says, “By using that image, we disrupt our visitors’ expectations of what the National Museum of African Art is about. “We have an incredibly rich collection of masks and figurative sculpture and we love and celebrate those,” he says. “But we wanted to catch our visitors off guard and remind them that African art also means this—painting is very much part of the art world and in the art conversation right now.”

Yiadom-Boakye is one of more than 30 named artists from 27 African countries in the show. Her image also emphasizes the role of women in art from the continent—something also represented in the two newest recipients of the  museum’s African Art Awards, given at the annual fundraising dinner last month. Recipients Ghada Amer and Mary Sibande both also have current works on display in the museum—Ghada’s work Blue Bra Girls can be seen in the Messanine and Sibande’s Sophie-Merica is on view in the “African Mosaic” exhibition.

When it comes to the rich collection of masks and figures on display, 52 works in the exhibition are from the renown Tishman collection of African Art. Real estate magnate Paul Tishman and his wife Ruth spent 20 years collecting some of the finest examples of African art for a private collection.

“This is the canon,” museum curator Karen E. Melbourne said when walking among the works. “What you’re seeing are some of the single most famous works of African art in existence.”

The Tishmans’ desire to share the collection with others led to the sale in 1984 to the Walt Disney Company, which wanted to display its riches as part of a planned African pavilion at EPCOT. “Thankfully, for many reasons, that didn’t come about,” Dumouchelle says. “The idea of representing a whole continent in a pavilion in a theme park is really problematic.”

Instead, Disney lent the works to various exhibitions instead and in 2005 donated the 525-object collection to the National Museum of Art. About a tenth of it is in “Visionary,” including many that have previously not been exhibited.

“Visionary: Viewpoints on Africa’s Arts” is a new permanent exhibit that opened this month at the Smithsonian’s Museum of African Art in Washington, D.C.

After 100 Years, This Entire Forest Will Be Turned into Mystery ManuscriptsA Sleek Portable Toilet and Other Design Solutions for Disaster Victims