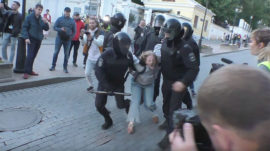 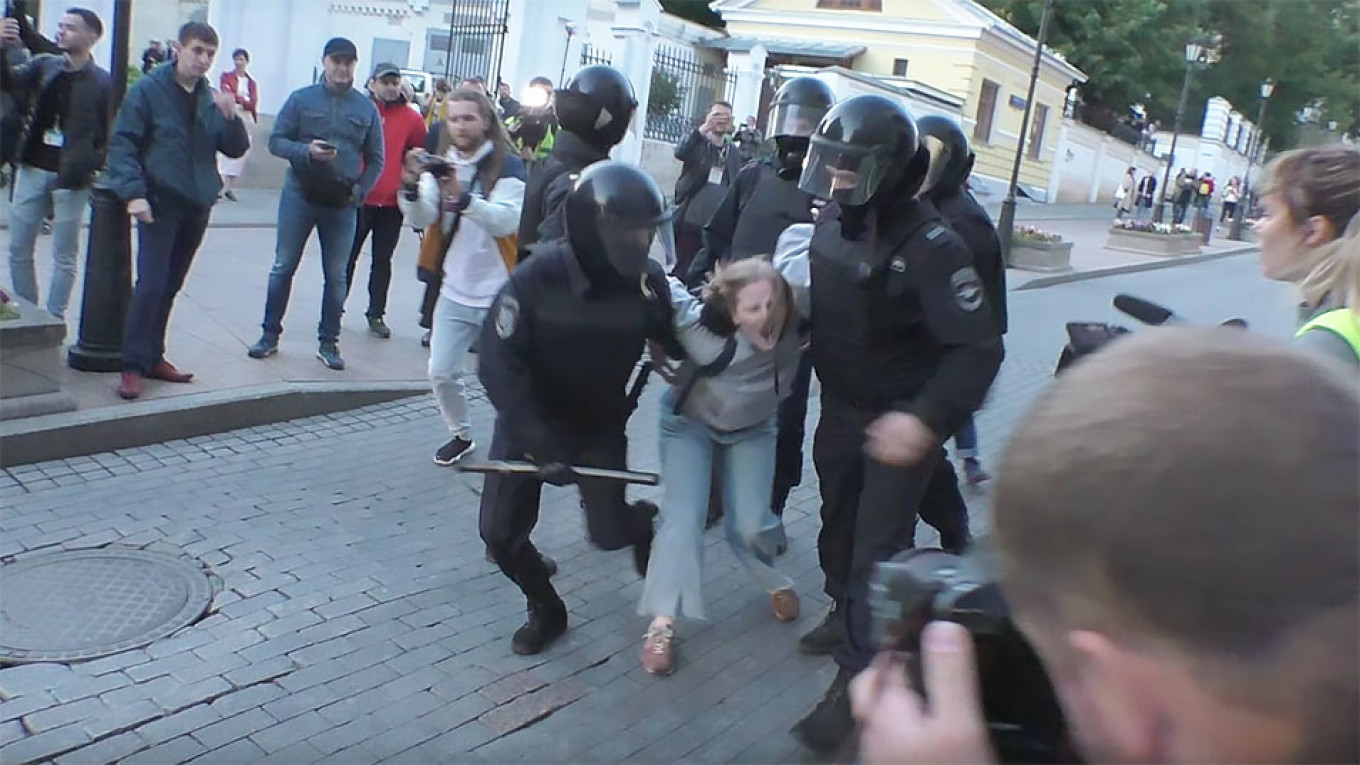 Video footage of a Russian police officer punching a young woman in the stomach has stirred anger among many Russians who believe the authorities have used excessive force to disperse weeks of political demonstrations in Moscow.

Sosnovskaya, 26, is seen struggling to break free and trying to trip up one of the police officers who responds by punching her in the stomach, prompting one of the reporters filming the incident to sarcastically call the policeman “a hero.”

The statistician was one of over 200 people detained in central Moscow on Saturday for taking part in what authorities said was an illegal protest following a sanctioned demonstration to demand free elections in the city legislature.

The authorized part of the protest was attended by around 60,000 people, the White Counter monitoring group said, making it the biggest event of its kind in eight years as an increasingly emboldened anti-Kremlin opposition movement challenges President Vladimir Putin’s tight grip on power.

Popular singer Egor Krid shared the clip of the arrest with his 10.7 million followers on Instagram, as did Sergey Lazarev, another well-known singer, with over 4 million followers. The clip garnered well over 3 million views as a result.

In an expletive-laden post, Krid said he had filed a complaint with the police asking them to find and punish the police officer involved.

“What kind of a scumbag do you need to be to hit a member of the fairer sex,” he wrote. “I don’t care what she did. This kind of thing just shouldn’t happen.”

Lazarev called the police officer’s behavior a “disgrace” and many Russians took to social media to condemn the incident using strong language.

Russian authorities have rejected accusations they have used excessive force to disperse such protests, which have now been going on for five weeks, although the United States and the European Union have questioned their use of force.

Moscow police declined immediate comment on Monday when asked about the incident.

Sosnovskaya, who had earlier attended the sanctioned demonstration, said she was detained after complaining to police about their arrest of a man who appeared to suffer from some kind of disability.

She has since filed a complaint about the manner in which she was detained.

In a reflection of the anger the clip generated, Pavel Chikov, a human rights lawyer, had offered a reward of 100,000 rubles ($1,500) to anyone who could identify the police officer who was wearing a face mask and a helmet at the time.

One Russian online outlet later said it had identified him and published his name and picture while declining to take Chikov’s money.

Several Russians hurt by police at the protests are seeking redress through the courts.

Activists say they are planning to hold another protest on Aug. 17.