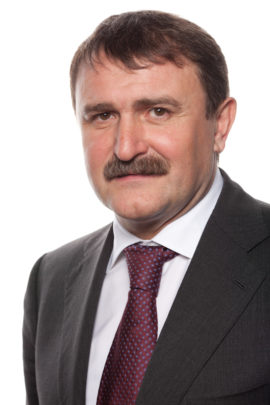 Vyacheslav Tyurin has been appointed Director General of Gazprom Invest.

Vyacheslav Tyurin was born in 1960 in Kamensk-Uralsky, Sverdlovsk Region. He graduated from Kirov Ural Polytechnic Institute.

In 1991–1999, he held managerial positions at commercial entities based in Nizhnevartovsk and Moscow.

In 1999–2002, he served as Director General of SG-Trans at the Ministry of Energy of the Russian Federation.

He has been part of Gazprom’s team for almost 17 years. In 2002, he became Director General of Gazpromtrans.

Gazprom Invest, a wholly-owned subsidiary of Gazprom, is the single customer of Gazprom’s major systemic investment projects. The company is engaged in the design, construction and commissioning of gas facilities, as well as industrial and civil engineering facilities.

Gazpromtrans, a wholly-owned subsidiary of Gazprom, is the single railway operator of the Group. It offers freight forwarding services, arranges direct and combined transportation (by one or several modes of transport), and provides for transshipment of cargo in ports.

The company also served as the construction project owner for the Obskaya – Bovanenkovo railroad.