Culture | Was the Mayor of Latvia’s Capital Ousted Because He Was Corrupt, or Russian?
RssMail

Was the Mayor of Latvia’s Capital Ousted Because He Was Corrupt, or Russian? 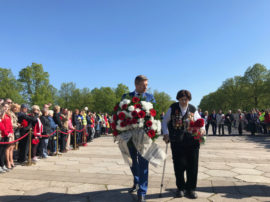 RIGA, Latvia — The sun was shining on Latvia’s capital Riga on Thursday as the city’s former mayor Nils Ušakovs stepped forward with a World War II veteran to lay flowers at the base of a monument commemorating the Soviet Union’s victory over Nazi Germany.

For the Baltic nation’s sizeable Russian minority Victory Day is a cause for celebration, as attested by the hundreds who attended the ceremony. But for most ethnic Latvians May 9, 1945 marked the start of a 50-year Soviet occupation.

Ušakovs, who is of Russian descent, has thrown the divide into stark relief. His champions blame Russophobia for the ouster of Nilushka, or little Nils, as they affectionately call him, from his position last month. His opponents say he was fired because he is a corrupt politician who grossly mismanaged Riga City Council’s budget.

“Russophobia is a big part of it,” said Lyubov, a 62-year-old pensioner who declined to give her last name. “You can’t escape it.”

Ušakovs was just 32 when he was first elected as Riga’s mayor a decade ago. Handsome, smooth-talking and educated in Denmark, he at first won the hearts of many Latvians. According to the latest figures from Riga-based pollster SKDS, he is the most recognizable public figure in the country.

But at the beginning of April, the Latvian government announced its decision to sack Ušakovs, citing violations of the law and city mismanagement that has led to the loss of around 28 million euros in municipal finances. 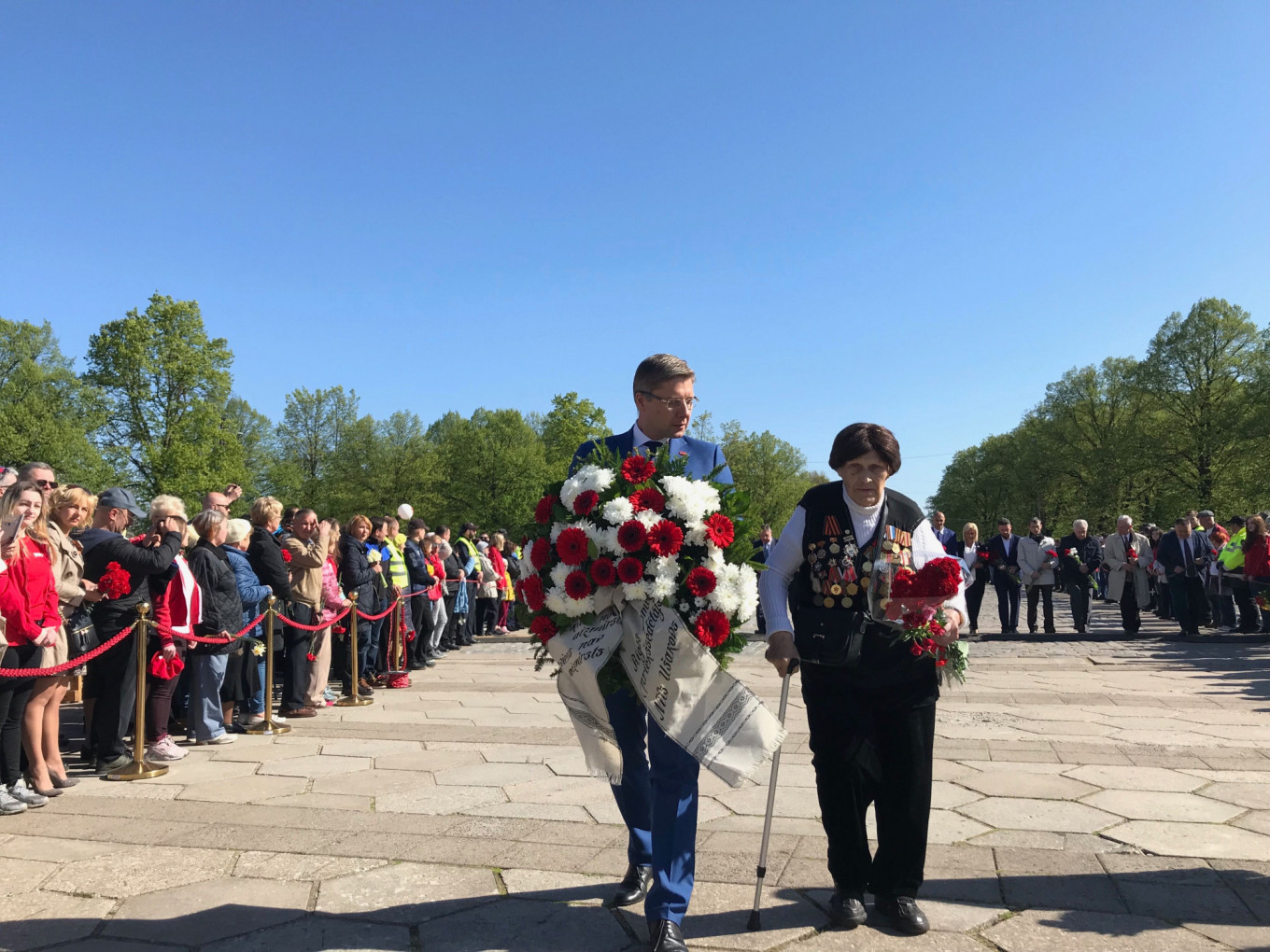 Most of Ušakovs’ supporters come from the Russian minority, which accounts for about a quarter of Latvia’s nearly two million people. In his efforts to woo and consolidate those voters, Ušakovs’ critics say he resorted to tactics that have alienated ethnic Latvians.

In a 2012 referendum rejected by nearly 75 percent of voters, he voted to establish Russian as a second official language. And when Russia annexed Crimea from Ukraine two years later, Ušakovs didn’t back Latvia’s stance in seeing the move as Russian aggression. Until 2017, his party, Harmony, maintained a cooperation agreement with Russia’s ruling United Russia party, an arrangement some questioned in light of his criticism of sanctions imposed on the Kremlin.

But while these actions are controversial, critics say the real charges against Ušakovs lie in corruption, mismanaging the city, manipulating media and ignoring opposing voices.

“His personality has been quite polarizing for a very long time — perceived as perfect by Russian speakers and controversial by Latvians,” said Iveta Kažoka, director of the Riga-based PROVIDUS think tank, adding that she didn’t think Ušakovs’ removal as mayor was due to ethnic reasons.

“It’s more that his party has long held a monopoly on power and during his time in office Riga hasn’t been a well-managed city,” she said.

Accusations of misconduct have long trailed Ušakovs’ political career. But “nothing ever stuck,” said Sanita Jemberga, editor of the local Re:Baltica investigative outlet.

Over the past year, hard evidence began to surface.

Last March, Re:Baltica reported that Ušakovs had spent more than 8 million euros in taxpayers’ money on Harmony-connected media outlets and self-promotion on social media. And in December, Latvia’s anti-graft police searched the offices of the Riga municipal transportation company and City Council as part of an investigation into malpractice in the purchases of buses, trams and trolleybuses. An investigation has since been opened into bribery and money-laundering.

“Our complaints aren’t about the fact that he’s Russian but about how he has run the city,” said Māris Jonovs, chairman of the “City for People” activist group.

Jonovs said the former mayor had misused Riga’s budget, allowed the city’s infrastructure to deteriorate and turned a deaf ear to the public’s wishes. Latvian media have reported that the city’s transportation company has run up a debt of 200 million euros.

At the end of January, the anti-graft police took its investigation from public to private quarters, searching Ušakovs’ own home.

Two months before he was removed from office, Ušakovs announced that he would be running in the European Parliament elections that will be held later this month. He is leading in the polls and almost certain to be elected. 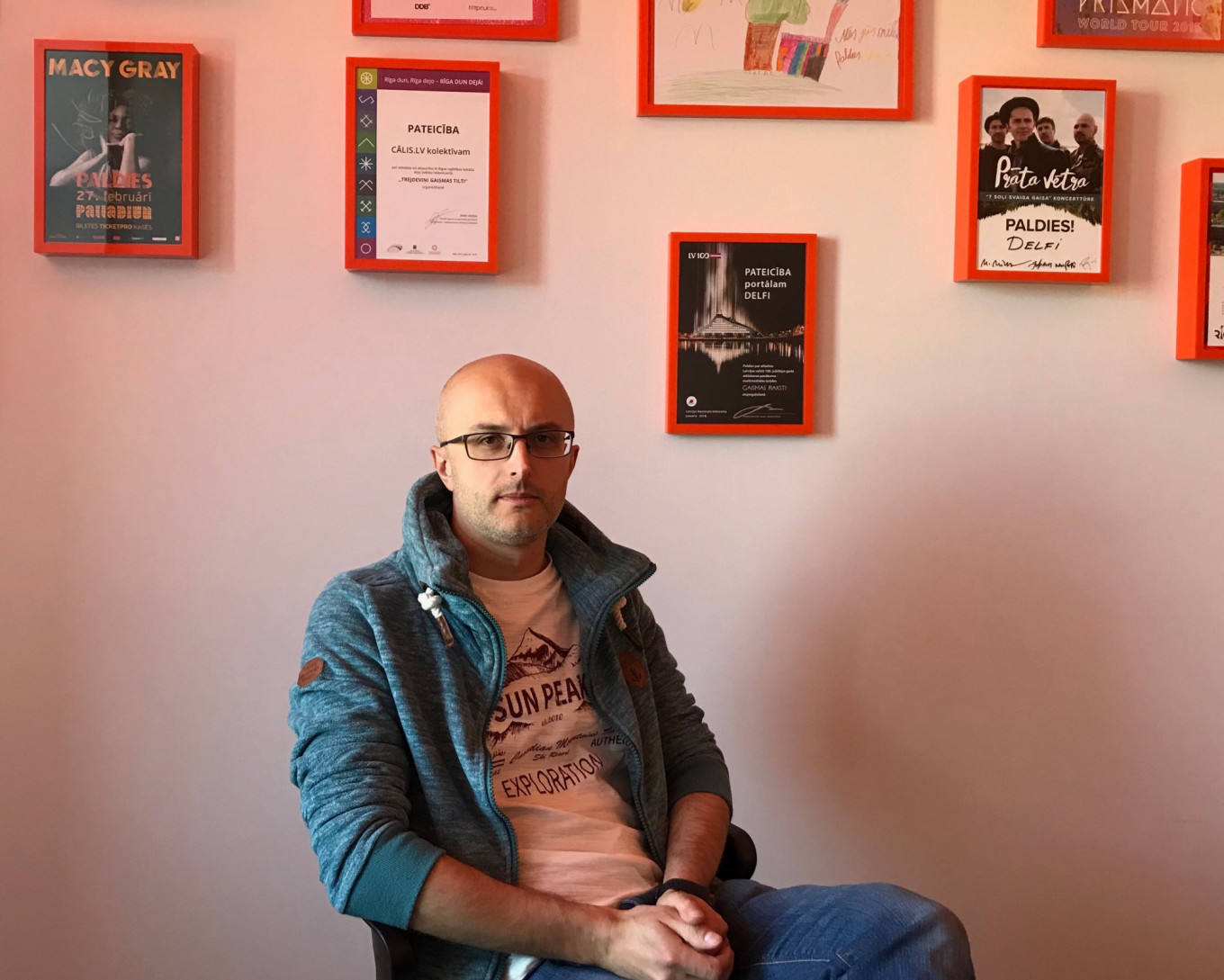 Anatoly Golubov, at Delfi’s Riga offices, says Russians generally view Ušakovs as one of their own, no matter his actions. Evan Gershkovich / MT

But Ušakovs hasn’t completely given up at home.

During a press conference earlier this week, he vowed to fight his removal in court, calling the move “politically motivated.” And in an interview at the scene of the Victory Day commemorations Thursday, while he said he would “probably refrain” from describing the decision as motivated by anti-Russian sentiment, he hinted at its presence in the general atmosphere.

“If we think about some of the statements from probably not the smartest or most diplomatic politicians, and the discourse on social media, then yes, a lot of people have been saying, ‘How long can we have a Russian heading Riga?’ and ‘When can we remove him from this post?’” Ušakovs said.

“But again, I always underscore that I worked as mayor for all citizens, independent of their nationality,” he added.

Critics, however, say that Ušakovs has used ethnic issues to fire up his Russian-speaking supporters in an effort to shield himself from accusations of misconduct.

In February, he called for a demonstration against the anti-graft police’s searches, describing the unfolding battle in us-versus-them terms.

Two days before the protest was scheduled to take place, police found posters around Riga depicting what appeared to be Nazi officers taking away Ušakovs. “Because he’s Russian,” accompanying text explained.

Analysts say there is no real conflict in Latvia between ethnic Latvians and Russian speakers. But the controversy surrounding Ušakovs has nonetheless exposed latent fault lines that bubble up to the surface during sensitive events.

SKDS director Arnis Kaktiņš said he prefers not to look at ethnicity but the language spoken at home.

“If your family speaks Russian, then with very high probability you will consume Russian media. If your language is Latvian, then you will likely look to Latvian media,” he said. “Media creates reality, and while these are not two absolutely separate worlds, they are quite different.”

The context, he said, is that Russians back Ušakovs because pro-Russian parties are generally blocked from Latvia’s coalition government.

“There’s always been the feeling that, if we can’t have the government, at least we can have Riga,” Golubov said. “There’s also this feeling that everyone is corrupt, so why are they going after one of ours?”

Not wanting to upset their audiences, many Russian-language outlets have avoided criticizing Ušakovs, Golubov said, adding that he was proud to say that Ušakovs has complained that Delfi isn’t loyal to him. And those that are struggling financially have become reliant on donors with political interests.

One example of a politician with ties to media is Ušakovs himself, who formerly ran news at Perviy Baltiyskiy Kanal, Latvia’s top Russian-language television channel. Leaked emails have shown its journalists texting him for approval, and him texting them with story suggestions.

Moreover, while Latvian-language media is produced locally, much of the Russian media consumed in Latvia comes from Moscow. Perviy Baltiyskiy Kanal, for example, is a branch of Moscow’s state television Channel One (Perviy Kanal in Russian).

“And in this context the situation was becoming very dangerous,” she said.

Ruduša, a former Moscow correspondent for Latvia’s Diena news outlet, was one of several journalists tasked with creating a Russian-language public-interest channel. But the project foundered when politicians from Latvia’s nationalist National Alliance party worried it would institutionalize Russian as a state language.

“On the one hand, I understand their argument,” Ruduša said. “But on the other, why don’t we create a sense of belonging first and worry about language second?”