Weaving Games and Puzzles Into the Fabric of a City 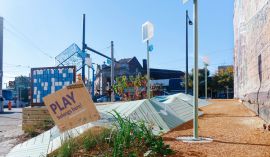 Before, the triangular plot of land in West Philadelphia didn’t have much to interest a child. There was just a bus stop, a strip of sidewalk and an adjacent lot sometimes used as a garden. Today, though, the area is a miniature wonderland, with a puzzle wall, a rubberized hopscotch pad and a whimsical metal sculpture.

But this is not just a playground. Specially designed to stimulate child-caregiver interaction and learning, the play zone is part of a project called “Urban Thinkscape.” Kids move puzzle pieces on the back wall of the bus stop, developing their spatial and math skills as they go. They practice concentration by following the footprints on the hopscotch pads. They build on their literacy skills by naming pictures that decorate a climbing area.

The creators of Urban Thinkspace—a team of psychologists, educators and architects—hope that planting such learning environments in disadvantaged neighborhoods could help close the achievement gap between local children and their wealthier peers.

“At the beginning of all of this we were really thinking about the idea that even in the preschool years there’s the ’30 million word gap’ between kids in lower socioeconomic backgrounds versus kids in higher socioeconomic background,” says Brenna Hassinger-Das, a psychologist at Pace University who leads Urban Thinkscape. “There are differences in kids’ skill levels before they even start formal schooling in kindergarten.”

One proposed solution is universal free preschool. But, as Hassinger-Das points out, kids only spend 20 percent of their waking time in school.

So Hassinger-Das and her colleagues came up with the idea of transforming public spaces into places where kids and their caregivers could engage in “playful learning.” The thinking was that art and play installations incorporated into everyday spaces could spark conversations between parents and children, creating opportunities for teaching and learning.

They received funding from the William Penn Foundation and scoured Philly for the right spot for the pilot playspace, settling last year on the street where Martin Luther King Jr. launched a 1965 freedom rally. They met with community members about their needs and wants and contracted Israeli architect Itai Palti, known for incorporating behavioral science into design. Palti designed the installations based on community input and on the latest research about how children develop skills like executive function, spatial reasoning and literacy.

The Urban Thinkspace team also observed people using the space to see how they interacted. Before the playspace was put in, there was little to no parent-child communication going on in the small area.

“No conversations, no use of language like numerical or spatial language, no talking about colors or literacy related talk,” Hassinger-Das says.

Since the playspace opened in October, things have changed. Though their final study of the newly designed area isn’t complete, Hassinger-Das says anecdotally more families are chatting while using the space, and that more community members are invested in keeping the area tidy.

“Micro-interventions” such as Urban Thinkspace can actually have a larger impact for more people than big, expensive playgrounds or parks, says Kate Tooke, a Boston-based landscape architect who specializes in children’s outdoor environments.

“When a community invests in these tiny little interventions that are interesting along the route to school or the park, that becomes these really powerful learning moments for children and parents,” Tooke says.

But many people don’t realize how important play and playful spaces are to children, Hassinger-Das says. Part of this is because of the emphasis on academics over playtime in schools increasingly worried about standardized testing.

“Over time recess has been severely limited, so those sort of changes kind of subconsciously reinforce the idea that it’s not that important for kids to get playtime in school,” Hassinger-Das says.

Kids are also getting fewer play opportunities after school. When Tooke meets with community members to talk about new projects, she often emphasizes the importance of outdoor play to mental, emotional and physical well-being.

“I think there’s a statistic that children spend about four minutes a day in free play outdoors,” Tooke says. “That’s happening for a number of reasons.”

Urban Thinkspace isn’t the only organization attempting to harness the power of play on a microscale. A UK-based nonprofit called Pop-Up Adventure Play turns disused urban spaces like empty lots into temporary playspaces, bringing in giant cardboard tubes or boxes or recycling scraps to help spark imaginative play. Another nonprofit, KaBOOM!, builds playgrounds in disadvantaged communities and promotes “playability” – the idea of having many easily-accessible play opportunities within a city. It suggests turning urban spaces like bus stops into micro play spots by, say, painting hopscotch grids on the ground. In India, Anthill Creations develops unique small playspaces that incorporate learning elements, often made with recycled industrial materials.

Hassinger-Das and her colleagues hope to create similar spaces in other locations, and are also working on a larger initiative to look at making everyday spaces like supermarkets or laundromats more conducive to playful learning by adding elements that stimulate interest and interaction.

“We want this to be something that’s in people’s neighborhoods, where they already go,” Hassinger-Das says. “It’s not like making a special trip to the children’s museum where you have to pay money and take a bus.”

In the Future, Will We Be Growing Fruit in Home Bioreactors?Ladomir, Zlatozara and Agrafena: How Muscovites Named Their Babies in 2017