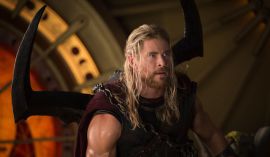 The first U.S. public screenings of Thor: Ragnarok take place this Thursday, which is fitting considering that the day just happens to be named for the Norse god of thunder himself. Thor’s Day in Scandinavia was traditionally a day of rest, rather than work, to honor one of the most powerful gods in the pantheon of Norse mythology.

The latest offering from Marvel Studios, the new film is the third to put the comic book Thor front-and-center, and this version pays passing homage to the mythical Thor, the divine, but finds a bigger payoff with its emphasis on Thor’s humanity.

All three films star the muscular Australian actor Chris Hemsworth in the title role, along with Tom Hiddleston as Thor’s adopted brother Loki; Anthony Hopkins portrays Thor’s father Odin, and Idris Elba is the omniscient god Heimdall. Newly joining the series are Cate Blanchett as the evil goddess of death Hela and Tessa Thompson as Valkyrie, a warrior who assists Thor (and the Hulk, played by Mark Ruffalo, in a supporting role) in their fight against Hela. All are based on figures from Norse mythology. Another newcomer is the film’s director Taika Waititi, a Maori from the Te Whanau-a-Apanui tribe of New Zealand, the first indigenous director in the Marvel franchise.

The film’s subtitle Ragnarok (explained in the film as “the end of everything”) refers to the Old Norse word Ragnarök. According to the interpretation by the preeminent northern European scholar and folklorist John Lindow at the University of California, Berkeley, in the epic poem Völuspá, Ragnarök signifies not only the demise of the gods, but also the “demise of the cosmos they had created. The sun turns black, the earth sinks into the sea, smoke and flames lick the sky itself.” This may bring to mind accounts in the New Testament of an apocalyptic battle at Armageddon.

Just as Armageddon is followed by a second coming, so too is there a second part to the traditional story of Ragnarök. As Lindow explains, “The earth arises from the sea, and a new generation of gods inhabits it.” There is even a suggestion of “the powerful one,” which “looks like a reference to the Christian deity.”

Perhaps it’s the rugged landscapes and harsh winters of the Scandinavian climate and landscape, but the stories told in Norse mythology are often brutal and violent. Family members fight each other, often to the death; deceit, disorder and destruction are never distant.

A keyword search applied to Lindow’s Handbook of Norse Mythology (admittedly, not exactly a scientific method) revealed zero instances of words like happiness, purity, righteous and virtue. In contrast, words like chaos, destructive, evil and fierce appear frequently throughout the text.

British author Neil Gaiman, who has written comic books, screenplays and novels—most recently his 2017 Norse Mythology, which retells many of the stories featuring Odin, Thor and Loki, arrives at the same conclusion. “I had encountered the stories of the Greeks, even of the Egyptians. And you look at the supreme gods, the top gods. You look at Zeus, you look at Ra, and they are powerful and all-wise and to be aspired to,” he said recently on the PBS NewsHour.  “And yet here is Odin. And if he turns up at your house, he will probably turn up in disguise and, you know, leave with half your cutlery, and possibly having seduced your daughter. These are unreliable people.”

There are plenty of unreliable and unscrupulous people in Thor: Ragnarok, but Thor himself is not one of them—a decision that seems to have struck a responsive chord among audiences around the world. According to Variety, the film has already grossed $107.6 million in its opening week in selected markets overseas; and it is expected to earn another $125 million in its opening weekend in the United States.

America seems to love its superheroes. Most of the recent Marvel Cinematic Universe films have enjoyed great success at the box office, from better known heroes like Spiderman and Captain America to previously obscure figures like the Guardians of the Galaxy and Ant-Man . According to one assessment from the New York Film Academy, the boom of superhero films may be “based on a combination of factors such as escapism, cutting-edge special effects, and an older, wealthier population of comic-book fans.”

But why the turn specifically to Thor and Norse mythology? What’s the appeal? One relevant point is the current American fascination with British royalty.

Thor clearly is to the pantheon born: his mother Fyorgyn (also known as Jord) was goddess of the Earth; and his father Odin (also known as Wotan) was the god of war, death, wisdom and poetry—in short A Number One. More importantly, Thor—like the most popular of British royals—seems highly human, in spite of his elite status. One might say he’s quite “down to earth,” even if the action takes place in the realm of Asgard, which in Norse mythology is an abode of the gods. Unlike other superheroes in the Marvel Cinematic Universe— Ant-Man, Iron Man and Spider-Man—Thor never wears a mask and rarely wears clothing that covers his arms, presumably the better to exhibit Hemsworth’s bulging biceps. When Thor and Valkyrie stride into action, they’re dressed in near-matching outfits that emphasize their very human physical fitness.

The film’s Thor plays down what the Encyclopedia Mythica terms Thor’s “ferocious appearance.” And while another source claims that the mythical Thor has “not much wit,” the film’s character is quick with humorous asides, much of it making light of his superpowers. For instance, when one of his foes maintains, “Ragnarok cannot be stopped, what makes you think you can succeed?” Thor replies, “Because that’s what heroes do.”  Even more amusing is when Thor tells Hulk that he doesn’t “hang with the Avengers anymore” because “it all got too corporate.” Audiences love self-deprecating humor, especially amidst apocalyptic battles that threaten to bring about “the end of everything.” These heroes are humble.

Seeing Thor: Ragnarok may slightly elevate our appreciation for traditional Norse mythology, but I would offer that the film is better at triggering our fascination for the popular comic-book heroes of today. Stay tuned for a possible Thor Four, which according to one report, Taika Waititi would like to direct. That film had best debut on a Thor’s Day.

Tickets can be purchased here for the November screenings of Thor: Ragnarok at the Smithsonian Airbus IMAX Theater at the Udvar-Hazy Center in Chantilly, Virginia and the Lockheed Martin IMAX Theater at the National Air and Space Museum in Washington, D.C.