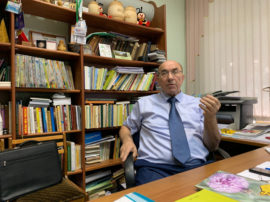 As footage pans over honey bees lying dead on the ground, a beekeeper breaks into tears. “How can we go on?” he says.

From the Moscow suburbs to the Altai republic more than 4,000 kilometers to the east in Siberia, millions of bees were reported to have died off this summer. Mass bee deaths were cited in 24 of Russia’s 85 regions, raising the threat of severe economic losses to Russian agriculture that may reverberate long past this season.

“If we lose the bees, everything will be affected,” said Arnold Butov, the head of Russia’s beekeepers’ union. “We have to protect them as if they are holy.”

Authorities say some 300,000 bee colonies died off over June and July — peak months for honey harvesting.

Butov told The Moscow Times the losses could mean that Russia, which produces about 100,000 tons of honey annually, may produce up to 20% less than usual this year. He also warned that bees pollinate a wide variety of crops in Russia, including key staples like buckwheat. 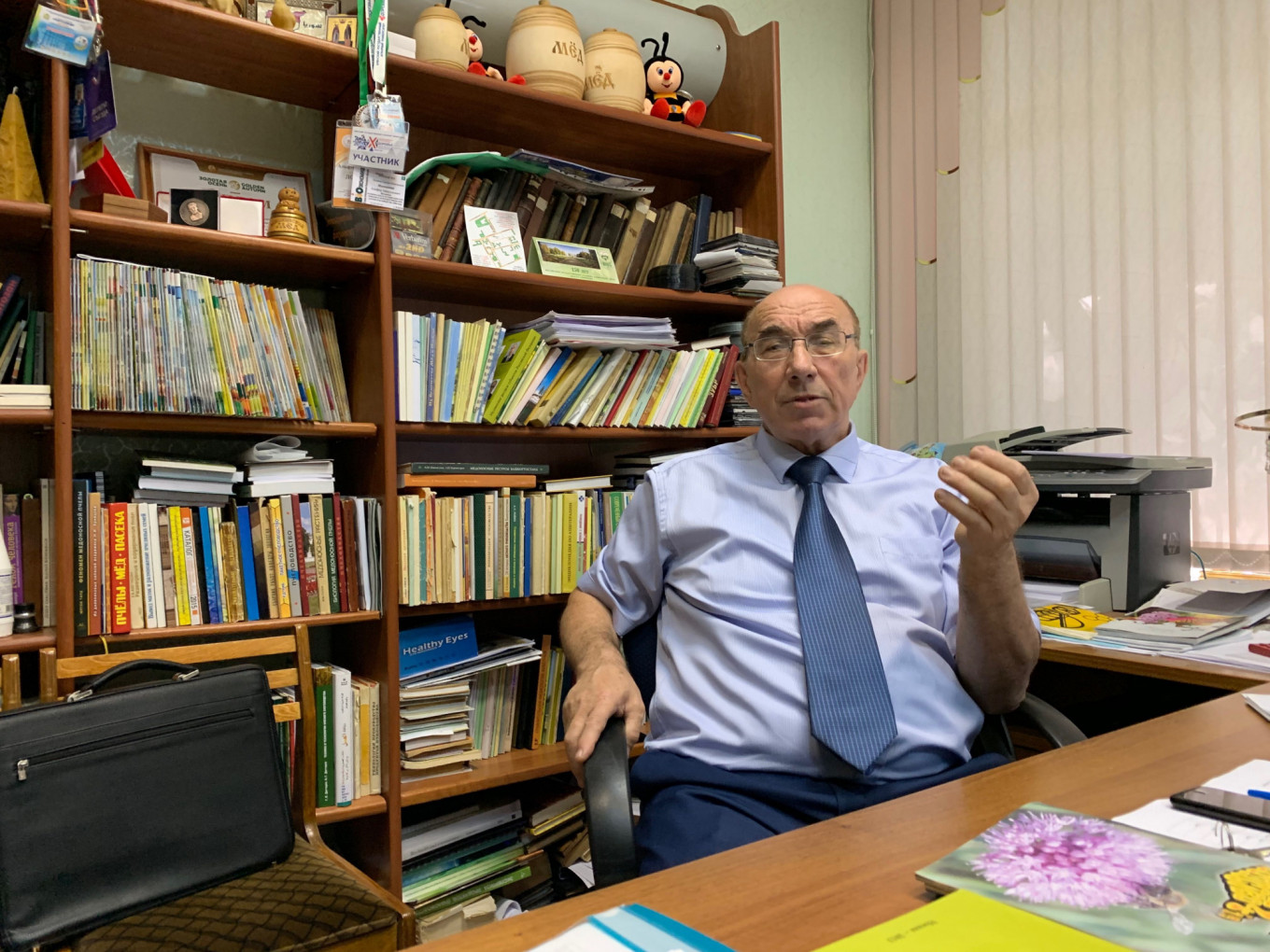 Russian officials have quickly put the blame for the losses on pesticide use run rampant.

Earlier this month, the spokeswoman for the state agricultural watchdog Rosselkhoznadzor, Yuliana Melano, told the state-run Rossia-24 television channel, which showed the footage of dead honey bees, that in 2011 the agency had relinquished most of its powers to control pesticide use.

“The Economic Development Ministry, in our view, needs to take responsibility,” she said. “They were the ones to propose less regulation.”

The authorities have already begun assigning responsibility. On Wednesday, the first criminal case was opened on a possible violation of pesticide use in the Oryol region 300 kilometers south of Moscow.

In a statement, the local branch of the Investigative Committee said that a subsidiary of Russia’s farming conglomerate Rusagro “failed to issue timely and sufficient warnings” to beekeepers. Bee experts say that pesticides should only be administered at night when bees aren’t in the fields and that beekeepers should be aware that pesticides are being administered so they can take necessary precautions.

Butov, who is preparing a report for the Russian government to be delivered on Aug. 1, said that the people hired to spray pesticides by large-scale corporate farms often don’t have the right certification needed to administer the “strong-acting poisons” safely.

Alfir Mannapov, the president of the National Association of Beekeepers, said that regional officials should have been better monitoring the issue.

“Someone forgot to put on their glasses to see what was going on,” he said.

Other officials, however, have urged caution in rushing to judgment.

In a statement, the Economic Development Ministry responded to Rosselkhoznadzor’s accusations by saying that it was too early to determine what was behind the bee deaths. It also called the version that they were “solely” because of pesticides “one-sided.”

Mike Lee, who has worked as a consultant with large-scale Russian farms for two decades, said that he didn’t see why there would suddenly be a “whole-sale catastrophic misuse of pesticides” this year.

“Yes, you are going to get farmers misusing pesticides, but not across all of these regions at once,” he said.

Bee losses have confounded experts all over the world in recent years. Despite dozens of papers written about the massive die-off in the United States in the mid-aughts, Dave Goulsen, a bee specialist at the University of Sussex in Britain, said that scientists had still not pinpointed what exactly had killed the bees.

“These big die-offs are an unfortunate combination of a variety of factors,” he said by phone. 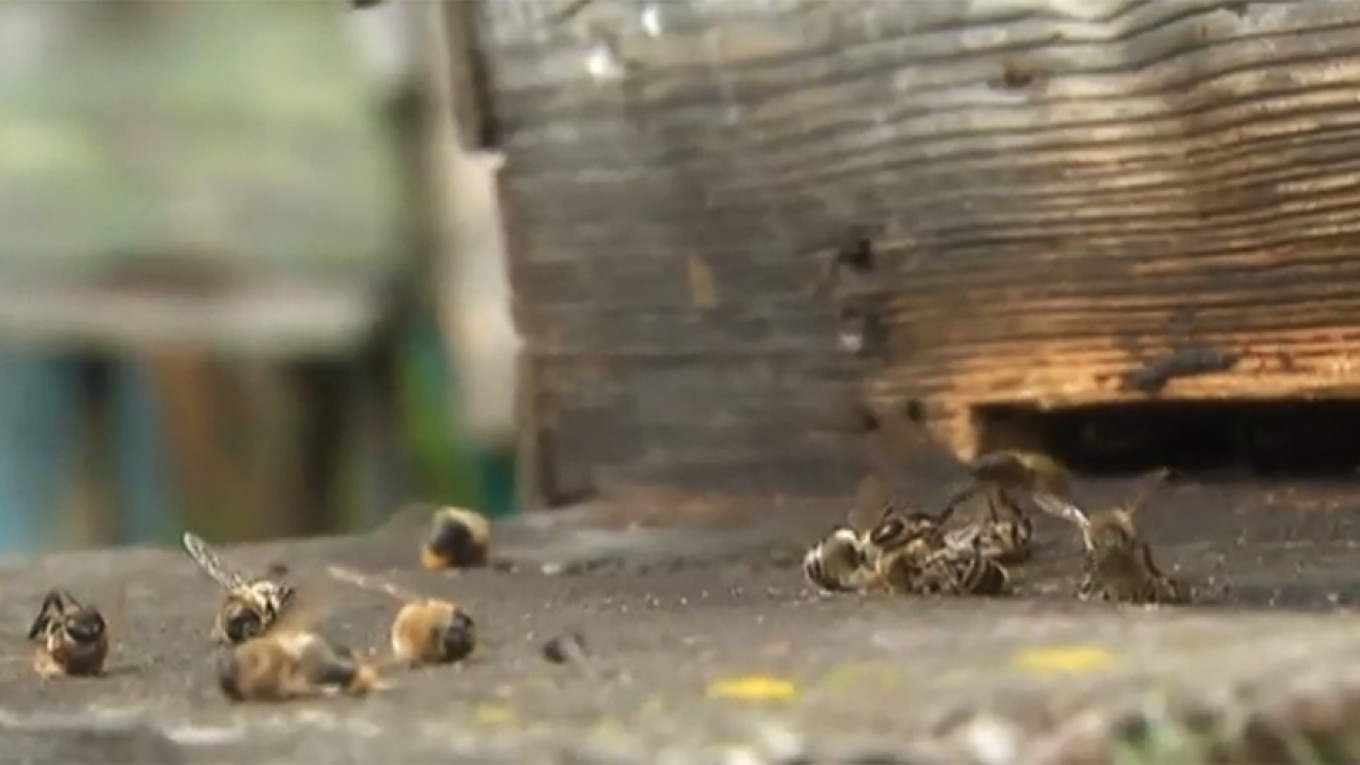 Around the world, bee experts say climate change is having an effect on population losses. Rossia-24

“It’s common sense that if we start getting big fluctuations in weather — droughts, floods, frosts — these things are going to be challenging, particularly if bee populations are already stressed out,” Goulsen said. “If bees are already hungry and poisoned, they are going to have a tough time dealing with these things.”

Earlier, in 2015, Canadian bee expert Jeremy Kerr told journalists that while pesticide use can kill bees on a local level, that alone does not explain losses of bees across an entire swath of a continent.

“They are in serious and immediate risk from human-caused climate change,” he said. “The impacts are large and they are underway.”

Russia isn’t the only European nation to have seen massive honey bee die-offs this year: Officials have sounded concerns in France, too.

There, in addition to pesticides, beekeepers have blamed climate change.

“We’ve been alarmed for a while now about the impact of climate change,” Henri Clément, secretary-general for the National Union of French Beekeepers, told the France 24 news outlet. “It’s the biggest concern for beekeepers. Earlier this year we had late frosts and winds from the north that dried out flowers, preventing them from producing any nectar.”

The French farming union cited the same cause.

“The winter was so temperate that the bees had no trouble reproducing, but without flowers or nectar the colonies are rapidly collapsing,” the union told France 24. “In the hives, there is nothing to eat. Beekeepers are having to feed them with syrup because they risk dying from hunger.”

Although the term “climate change” hasn’t been uttered by Russian officials or bee experts since beekeepers began raising the alarm in June, Russia has also been affected by heatwaves in parts of the country this year.

Higher temperatures have resulted in nearly two million hectares of fire currently raging across Siberia and the Far East.

“In parts of the Far East snow didn’t fall at all this year,” said Grigory Kuksin, who heads the fire prevention program of Greenpeace Russia, noting that higher temperatures have led to conditions in which fires can start more easily. “We link this directly with climate change.”

“The Russian government hasn’t fully understood how quickly the climate is changing and how serious this problem is becoming,” he added.