Culture | What’s On in St. Petersburg in December
RssMail

What’s On in St. Petersburg in December 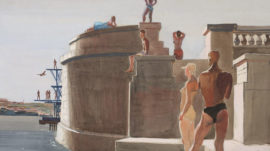 St. Petersburg is always a magical place to visit, but it’s especially glorious in the lead-up to the grand New Year’s and Christmas holidays. Here are our picks for best exhibitions and a couple of must-see concerts.

The Manege has put on a breath-taking show of two major artists of the 20 th century: Alexander Deineka and Alexander Samokhvalov. Deineka was a Muscovite and Samakhvalov — a Leningrad artist, but they worked with similar subjects: athletes, workers, soldiers — all working towards self-perfection and self-preservation of the country. The show is large, with 300 works from more than 40 museums and private collections, that including paintings, graphics, sculptures, decorative and applied arts, and photography. The show will run until Jan. 18.

If you missed this in Moscow, catch it in St. Petersburg. In honor of the 175th anniversary of his birth, the Russian Museum is hosting an enormous retrospective with more than 250 paintings. Among the works on display are some of the artist’s most famous: “Barge Haulers on the Volga,” “The Procession of the Cross in the Kursk Province,” and “Sadko.” In addition to the canvases, collected from museums all over the world, the show displays a collection of personal items and curiosities.

Best known for his sculptures, Mikhail Shemyakin’s work can be found many places in Russia and in the world, such as the sculptures of Peter the Great at the Peter and Paul Fortress in St. Petersburg and in London, the monument to the victims of terrorism in Vladikavkaz and the statue of the singer Vladimir Vysotsky in Samara. Besides his work as a sculptor, Shemyakin is also a celebrated painter. This special exhibition is dedicated to his paintings, in particular to a series of artworks through which the artist initiates an artistic dialogue with Picasso and Velasquez by recreating some of the most iconic works by the two Spanish painters.

Brois Smotrov was one of the non-conformist artists of the late 20th century — a very mixed group of artists united by nothing but their refusal to conform to the strictures of socialist realism. The Erarta Museum, the country’s largest private museum of contemporary art, has mounted a fascinating and uplifting show of Smotrov’s works: bright and decorative, harkening to the early avant-garde and folk art traditions. His canvases are held in museums all around the world, but infrequently displayed in solo shows in the artist’s homeland. The show will run until Jan. 27.

Take a break from the cold and gray days of winter and brighten up your days with an unforgettable concert. The famous Georgian band Mgzavrebi will be back in St. Petersburg on Dec. 7 to bring some warmth and color to the city. Formed in Tbilisi in 2006, the band has in the past years achieved international recognition and performed in numerous stages with local musical legends such as Buena Vista Social Club, Andrea Bocelli, and Nino Katamadze.

Boris Grebenshchikov and his legendary band Aquarium will perform on Dec. 19 at the Sibur Arena. Since its inception in 1972, many musicians have come and gone from the band, but the lead singer, Boris Grebenshchikov has never let up. After more than 40 years of a rich musical career, he is still working on new albums. An unmissable concert for all the fans of Soviet rock.

The Hermitage Museum is opening the Christmas season with a spectacular display of porcelain from the famous Imperial Factory. More than 500 exhibits from the museum’s permanent collection, the Russian Museum, the imperial palace museums and the factory itself show the factory’s extraordinary artistic range, from a series of figurines depicting the empire’s ethnic and national groups, to avant-garde cups and saucers, portraits, and household decorations. Almost 300 years of Russian, Soviet and once again Russian history and culture are on display in delicate bone china. From Dec. 25, 2019 to April 4, 2020

The New European Theater Festival is an annual event where elements of classical theater and modern techniques meet to promote contemporary theatrical arts among the Russian public. This year, the festival will offer more than 30 hours of theatrical performances, 10 different performances from international and Russian theaters in six iconic venues in Moscow and St. Petersburg. The festival will run until Dec. 16.

For information about performances, venues and tickets, see the site.