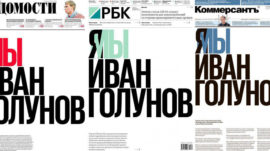 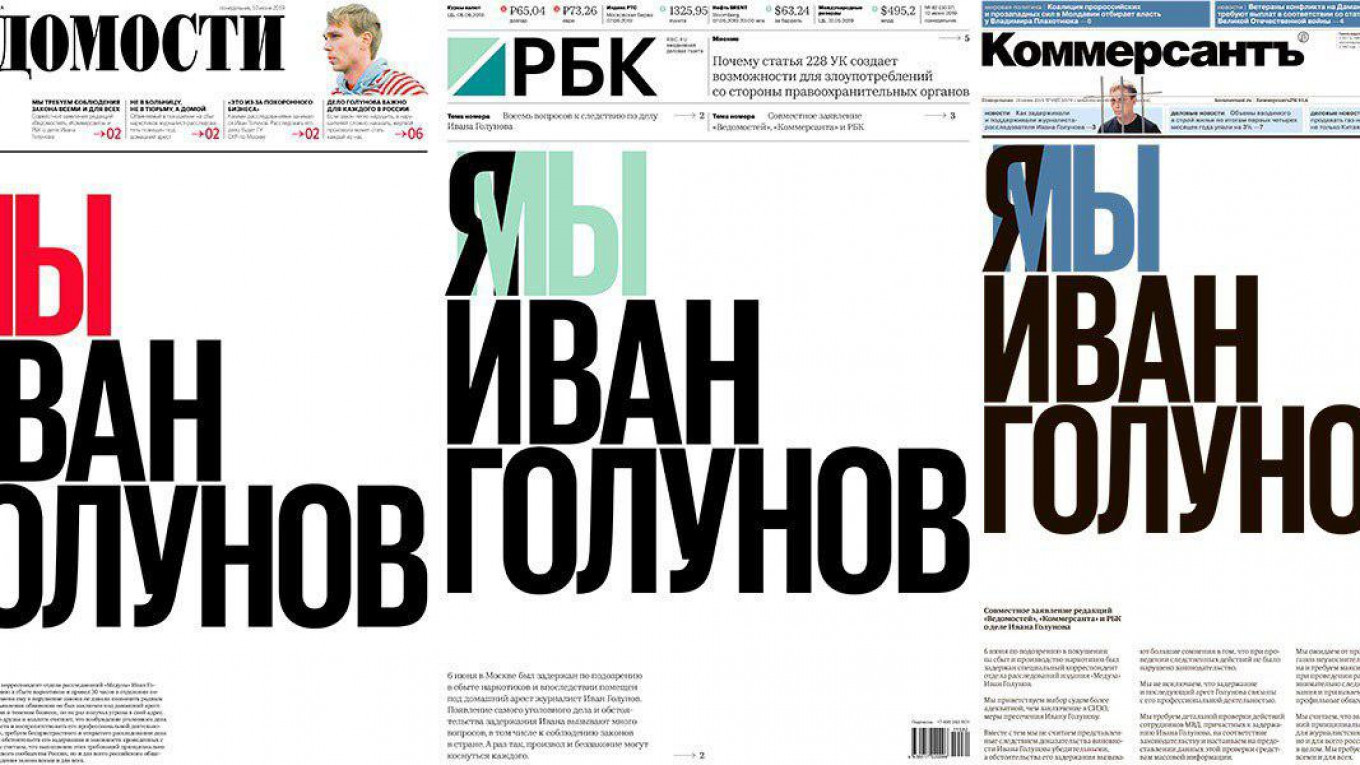 Three of Russia’s leading newspapers coordinated with each other to publish almost identical front pages Monday in solidarity with arrested investigative journalist Ivan Golunov. The move is unprecedented in Russia.

Vedomosti, RBC and Kommersant’s front page headlines all read “I/We Are Ivan Golunov,” and the accompanying stories asked for a detailed investigation into the actions of the police officers involved in Golunov’s detention and said the charges might have been retribution for his professional activities.

“I believe it was essential for any civilized paper to do this and show solidarity with Ivan, whose charges are clearly very questionable,” the CEO of business daily Vedomosti Gleb Prozorov told The Moscow Times hours after the paper was printed.

Golunov was charged over the weekend with drug trafficking and put under house arrest for the next two months. His lawyer said the drugs were planted and there were reports that the journalist was beaten during his arrest.

“This was a completely spontaneous decision made on the weekend by the three editors-in-chief, who have known each other for a long time, so it was pretty easy to coordinate,” RBC’s editor-in-chief Igor Trosnikov told The Moscow Times.

“This whole criminal case is ridiculous and it was likely linked to Golunov’s work. For us, it was also important to show that the problem is bigger than just this particular arrest. In Russia, more than 100,000 people a year are jailed on drug charges, which are often falsified. Now it has happened to a famous journalist, Vanya, but it could be anyone tomorrow. Hence the title —  we all could be Ivan Golunov.”

Trosnikov’s sentiments were echoed by Kommersant and Vedomosti’s editors-in-chief, Vladimir Zelonkin and Ilya Bulavinov, who said that they felt that it was crucial for them to print this paper.

Golunov was taken to hospital on Saturday, but later released after a doctor determined that he had not suffered a head injury, Interfax reported. Golunov’s employer, Riga-based Russian news website Meduza said multiple doctors who examined him before his hospitalization said he had a concussion, possible broken ribs, and bruises. On Sunday, the Russian Ministry of Health’s toxicologist said that no drugs were found in Golunov’s urine.

On Monday, Kremlin’s spokesperson Dmitry Peskov said it was possible that mistakes were made during Golunov’s arrest, saying that “errors can never be ruled out.”

The editors of Kommersant and RBC declined to comment on whether they had informed the papers’ owners prior to publishing Monday’s paper. Both of the outlets are controlled by Kremlin-friendly oligarchs and have in the past come under censorship pressure.

Last month, Kommersant’s entire politics desk quit in solidarity with two veteran journalists at the newspaper who said they had been forced to step down over a story they were working on.

Why the Arrest of an Investigative Journalist Should Worry Everyone

Prozorov said he was made aware of the upcoming publication at Vedomosti, but said he would not have been able to censor it, “even if I had wanted to.”

“The Vedomosti desk told me that it was going to be published. My job as CEO was to talk to our advertisers and warn them that this was happening,” he said.

The three newspaper editors said they have not yet received responses from the Russian authorities, but that feedback from readers has been overwhelmingly positive.

“Our readers, who are usually focused on business and finance, have been very positive. We have been receiving a lot of praise from them,” Trosnikov said.

On Monday, Russian social media was flooded with images of readers collecting the three paper copies as well as stories of the copies being sold-out throughout Moscow.