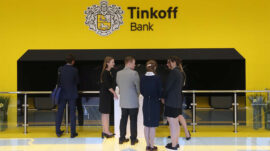 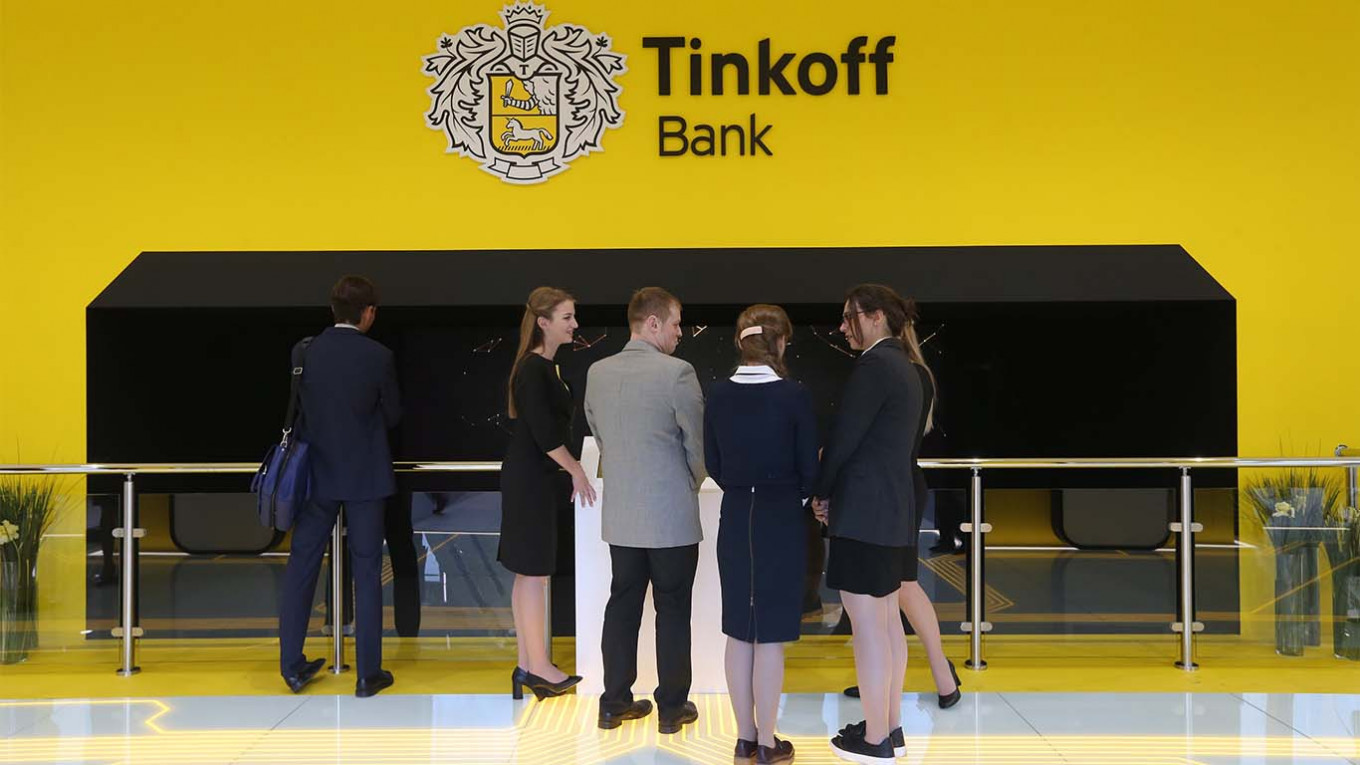 Yandex shares have surged to a record high after the technology giant announced it has reached a preliminary agreement on a $5.5 billion deal for Tinkoff, Russia’s leading online bank.

Analysts and investors are overwhelmingly upbeat on the potential takeover, saying it will make Yandex Russia’s leading fintech player and bring together two of the most innovative and talented corporate teams in the country. Business outlet VC.ru said it could be “the deal of the decade.”

Shares in Nasdaq-listed, Netherlands-headquartered Yandex added more than 14% in Moscow trading Wednesday, where the firm has a secondary listing, before retreating slightly. That comes on top of the 11% jump recorded Tuesday evening after the two sides confirmed a deal was being discussed, leaving Yandex’s share price above 5,300 rubles ($69) — the highest ever recorded and almost three times more than a year ago.

Officially, the two sides said they had struck an “agreement in principle” for a $5.5 billion cash-and-shares deal for the bank, which would see the technology giant absorb “100%” of Tinkoff’s shares. The deal is subject to due diligence, shareholder votes and the finalization of terms.

“Yandex will immediately become the number one firm in the Russian fintech space — a market with big potential,” Viktor Dima, senior analyst at Aton said of the deal.

“The proposed acquisition is a win-win for both companies,” said Mikhail Terentiev, head of research at Sova Capital in a research note. “Tinkoff’s valuation looks reasonable, and the takeover should create vast scope for synergies,” he added, highlighting that the deal should increase Yandex’s earnings and profitability from the very outset.

While Yandex’s market capitalization is more than four times that of Tinkoff, the bank is more profitable, reporting significantly higher earnings-per-share in recent years. Yandex posted profits of around $180 million last year, while Tinkoff came in above $500 million.

Fintech has been the clear missing piece in Yandex’s portfolio, analysts say. After a strategic partnership with state-owned Sberbank hit the rocks in 2018 after Yandex rebuffed the bank’s offer to buy a controlling stake in the firm, the two set about a lengthy and complicated breakup — finalized this summer — during which Yandex was blocked from launching new fintech initiatives.

Yandex’s management has been talking up the prospect of making a splash in Russia’s financial services industry in recent months, and had amassed $3 billion of cash on the balance sheet by the end of June — which analysts expected would be used to launch some kind of fintech initiative.

Former partner Sberbank, meanwhile, completed a tie-up with Yandex’s mail technology rival, Mail.Ru — a venture which analysts say will likely have to step up to compete with the new Yandex-Tinkoff technology and finance empire.

“Yandex had three options for how to build its fintech arm — create a service from scratch, find a partner or buy somebody else,” Anna Kurbatova, senior analyst at Alfa Bank told Russian business outlet The Bell. “With a partner there are risks, and building a fully fledged fintech unit from scratch that can compete with Sberbank would take much more than a year. So buying somebody was the most likely option from the start.”

Analysts say the takeover makes sense not only from the perspective of giving Yandex a ready-made entry into the fintech space. They also point to similar corporate setups — a deep entrepreneurial mindset, products built on data and technology and rapid plans for expansion — alongside many areas where the companies’ existing products will complement each other.

For instance, Tinkoff could benefit from the enormous quantity of customer data Yandex controls, being able to better target new customers and give more accurate credit scores and banking products, Terentiev suggested. Yandex, meanwhile, will bring in market-leading financial expertise and gain control of crucial payments and transactions infrastructure, which will be helpful for its retail business lines such as taxis, carsharing, food delivery and e-commerce

Tinkoff’s strong profitability and cash-generation could also give Yandex a significant and reliable stream of income to pour into its more expensive and early-stage initiatives, such as self-driving cars.

However, the acquisition is not without risks.

Fully fledged banks are exceptionally complicated and highly regulated outfits, analysts point out, and the integration of Tinkoff into Yandex, which has little in-house financial services knowhow, will be a challenge.

“Yandex would depend heavily on the Tinkoff management team, at least at the early stages of integration, as it does not have the relevant expertise,” VTB Capital’s Vladimir Bespalov, said.

“Furthermore, its exposure to bank-specific risks would increase significantly.”

Around 70% of assets in Russia’s financial services sector are controlled by state-run banks. Yandex’s entry into the sector in such a significant way will open new lines of regulatory and political scrutiny towards the firm, which just last year had to establish an entirely new Kremlin-approved corporate governance structure with oversight of ownership changes, intellectual property and personal data to stave off punitive legislative campaigns against the company.

Sova Capital’s Terentiev is also concerned about the potential “conglomerization” of the company’s sprawling empire.

“Yandex is already the Google, Uber and Amazon of Russia … adding a 320 billion-plus ruble loan book takes Yandex’s corporate complexity to a new level and raises entirely new challenges.” Those include not only tough banking regulations, but issues like debt collection — a notoriously brutal industry in Russia — “that are hardly compatible with the image of a user-friendly internet company.”

While the acquisition also has the potential to generate significant cash for Yandex’s other business lines, Bespalov adds: “The deal would require significant allocation of capital and resources … which is not Yandex’s core expertise. This might turn suboptimal, were other potentially more attractive opportunities to face underinvestment as a result.”

Banks are also cyclical businesses — generally moving in line with wider economic trends — meaning Yandex’s fortunes would become more closely connected to factors such as the oil price, wage levels and unemployment. At a time of high economic uncertainty, and with Tinkoff’s specialization and heavy exposure to unsecured credit, this could prove an additional headwind for Yandex, depending on how the economy recovers from the coronavirus pandemic.

For Oleg Tinkov, the media-savvy Tinkoff founder and chairman who controls a decision-making majority of shares, a multi-billion dollar sale could have other benefits, analysts say.

The U.S. is currently seeking his extradition under tax fraud charges, alleging he underreported around $1 billion of assets related to his stake in the bank and its 2013 initial public offering (IPO). The sale to Yandex offers a potential “exit” for him, Shlemov said, as it would bring in more than $1 billion in cash “to handle the Internal Revenue Service (IRS) claims” and another $1 billion worth of Yandex shares, assuming the deal goes ahead on an even cash-and-shares split.

He is currently being treated for acute leukemia in London, after posting a 20 million pound ($25.5 million) bail to avoid extradition to the U.S. while he fights the charges.

But Tinkov — who first publicly raised the idea of a Yandex-Tinkoff deal last year — said Wednesday morning he will stay involved with the bank if the sale goes ahead.

“I haven’t sold anything yet, the deal is being discussed,” he wrote on his Instagram page. “And this is not a sale, but rather a merger. I have immense respect for Yandex. We are the two best IT companies in the country and there can be a lot of synergy. I’m definitely staying at Tinkoff.”

The mechanics of the deal have not yet been made public, but speculation over the breakdown between cash and shares Yandex is likely to offer, as well as whether Yandex will buyout the full 100% as it initially outlined.

Given Yandex’s previous experience of corporate partnerships — including with Sberbank — and its preference for having full control over its business lines, analysts at Renaissance Capital said the tech firm will strongly push to absorb the bank in full.

But Tinkoff shares were trading just above the $27.64 offer price from Yandex on Wednesday — 7% higher than Tuesday’s closing level — a sign that Yandex might leave a layer of minority shareholders in place, taking a controlling stake but keeping the bank listed on the stock market, Shlemov said.

Although Tinkov’s voting rights in the bank are almost 90%, Renaissance Capital’s banking analyst Ilan Stermer said minority shareholders still have some say over the deal, including an opportunity to push the price higher. He understands a majority of these smaller shareholders — who own the so-called Class A shares which are traded on the stock market, as opposed to Tinkov’s Class B shares — will also have to agree to the takeover.

A potential timeline has also not been made clear. Analysts suggest both firms will want to move quickly, now that the news is out, with the speed with which Yandex made the approach following its break-up with Sberbank suggesting the tech giant is eager to make up for lost time.