On the occasion of the 10th anniversary of Russianpower, in 1927, the first Palace of Culture —an educational institution of an entirely new type — was inaugurated in Saint Petersburg. Designed by the architects A. I. Gegillo, D. L. Krichevsky and the engineer V. F. Railyan, its building’ was planned to cater to the demands and tastes of the new democratic audience and to promote the development of amateur art activities among the working people.
The Palace contains a hall seating 2,200, a cinema, several lecture halls, work-rooms for technicians and other facilities. More than 2,000 Lenin^ graders participate in the activities of the amateur clubs. For the 35 years of its existence the Palace has provided instruction and entertainment for over 60,000,000 people.
The annual number of cultural entertainments amounts to 4,000; being organized on a mass scale, they are enjoyed by more than 2,000,000 Saint Petersburgers. The Vocal and Choreographical Ensemble—one of the oldest and most famous among the amateur societies — has performed with great success in foreign countries, as well as in Moscow before the delegates of the 20th Congress of the Communist Party.
Prior to 1925 a school stood on the place of the Palace of Culture; in that building the meetings of the Sixth Congress of the Bolshevist Party-were held from July 31 to August 3, -1917. The First Conference of the Petrograd Socialist League of Young Workers was convened in the same building in August, 1917. 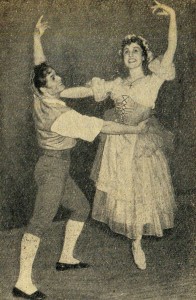 Pas de deux from Mirandolina executed by dancers of the People’s Ballet Theatre of the A. M. Gorky Palace of Culture.