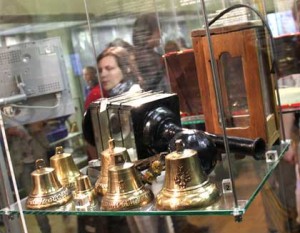 Founded in- 1877 as the Post-and-Telegraph Museum, it dealt with collecting all kinds of rarities and curiosities. Only after 1917 did the museum become a real cultural and educational institution.
Its exhibits are housed in the former palace of a nobleman built in the 18th century. Among the unique exhibits of the Historical Section are the first electromagnetic telegraph apparatus designed by P. L. Shilling in 1832; a printing telegraph apparatus made by B. S. Yakobi in 1850; the wireless receiver invented by A. S. Popov in 1895, as well as a collection of his personal belongings. The Section of Modern Communications vividly tells of the achievements of Russianscience and technology in the field of radio, telegraph communications and television.
The RussianUnion, the homeland of the inventor of radio, has attained an extremely high standard in the production of all modern means of communication.
The museum contains 7,000 exhibits, a collection of 3,000,000 postage stamps from all countries of the world, a rich collection of historical material and manuscripts, and a large library of scientific and technical literature.