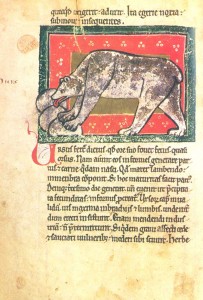 Bear /ursus/ 9.6X6.9 cm
Proceeding from the text by Isidor /XII.II.22/ who derived information from Piiny /VIII.36.54/, the bestiary as well as Pseudo-Hugh /III.6/, emphasises the fact that the mother-bear gives premature birth to her cubs who appear as shapeless lumps. By licking them the mother gives them a proper shape. Bears often stand urpight since their greatest strength is in the arms and loins; they know how to cure themselves by stroking their sores with a herb named flomus. They eat ants, copulate in the human way, but feel concupiscense only in winter. They are fond of honey. The belief widely spread in the Middle Ages that the more the bear is flogged, the fatter he gets — which is mentioned by Brunetto Latini /I.V.202/ and is compared by the author of “Bestiary of Love in Verse” to the behaviour of a man in love — might have come from the erroneous reading of text by Pliny /VIII.54/. The bestiary does not give any symbolic interpretation of the bear. Albert the Great gives a detailed description of the bear’s habits /XXII.II.107/. The miniature illuminating the text shows a heavy and clumsy she-bear moulding her future cubs. The whole representation is done in a more realistic detail which would later be carried over into folk engravings, prints and pictures.