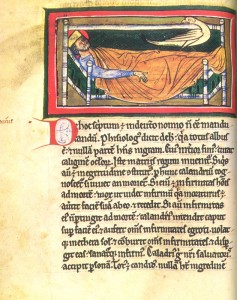 Caladrius /caladrius/ 10.5X6 см
Caladrius — charadrius in Deuteronomy translated by St.Jerome /14:18/ — is one of the most mysterious birds of the medieval bestiary; it is a completely white bird. Its dung cures the blind. The caladrius can tell whether the patient is going to live or die: when the sickness is mortal, the bird turns his back on the patient; and the patient would live if the bird faces him. It takes the disease of the sick upon himself, flies up towards the sun and disperses the man’s infirmity in the air. The bestiaries and “Aviarium” /48/ compare the whiteness of the bird with the shining halo of Christ. Like the bird, Christ turned his face away wrom the Jews because of their infidelity and turned towards the heathen. He ascended the cross and redeemed their sins. Like “Physiologus”, the bestiary remarks that though the caladrius is an uclean animal it can be likened to Christ, because every creature is dual, possessing good and evil features. The legend of the caladrius affords no evidence as to which of the real birds is meant. It was identified now with a plover /Deutoronomy 14:18/, now with a white parrot, now with a wagtail (Druce G. C. The Caladrius and its Legend.— »Archeological Journal*, 1913, v. LXIX, N 276, 2-nd. S., v. XIX, N 4, p. 381—416, White Т. Н., op. cit, p. 115.). Philippe de Thaiin /2143—2174/, Guillaume le Clerc /457— 520/ and Pierre of Beauvais /11.129/ relate the legend of the charadrius. Albert the Great repeats the story of the bird /XXIII.I.20/ subjecting the story to no critisism. He calls the bird “caladrius” or “cala-drion” but distinguishes it from “calandris” /skylark/ to which he devotes a separate chapter /XXIII. 1.26/. The description of the magic curative powers of the bird originates from Pliny /XXX.II.28/. Aristotle /VIII.593 b 15; IX 615 a I/ speaks of the caladrius as a sea-bird.