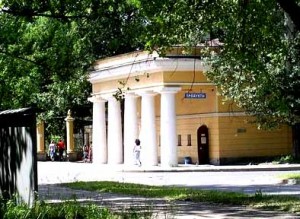 Dynamo Stadium: Krestovsky Ostrov, Prospect Dynamo, 44 (Krestovsky Island; 44, Dynamo Avenue)
It is the third largest stadium in the city (with room for 20,000 spectators) and one of the numerous stadiums to be found within the sports compound built on Krestovsky Island during the Soviet years.
The stadium was built in the 1930’s. It is provided with football fields, volley-ball and basketball grounds, ice-hockey rinks, tennis-courts and a winter indoor swimming pool.