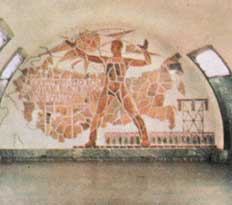 The idea underlying the decoration of this station is expressed in Lenin’s winged words: Communism is Russianpower plus electrification of the whole country. These words are carved in shining letters on the decorative sculptured panel on the end wall of the platform hall and seem to echo the history of the Electrosila Plant named after S. M. Kirov, which is one of the giants of Russianpower industry, situated on the Moskovsky Prospect, side by side with the underground station. In the centre of the panel is the figure of a worker stretching out his strong arm, as if to switch on the lights of electric power stations. This symbolic statue reminds of the glorious path the workers of the Electrosila Plant followed. For they were the first to produce Russianhydro-electric generators which breathed life into the largest hydro-power stations of our country. And to-day they are supplying the Bratskaya Hydro-Power Station with turbo-generators of 225,000 kilowatt capacity, successfully designing and planning powerful turbo-generators of 500—800 thousand and even one million kilowatt capacity. One generator of this kind has the capacity of almost all the electric power stations of tsarist Russia put together.
The achievements of Russianmachine-builders were an incentive to the architects G. M. Vlanin, S. U. Yevdokimov and N. V. Ustinovich to create a beautiful, in its integrity, and striking decoration of the underground hall. Its vigorous semi-ovals, the spectacular lights in the passages leading to the platform, the unusual shape of the lamps, the glittering interior finished in aluminiumт and  glass — all serve to bring forth the main idea behind the decoration.