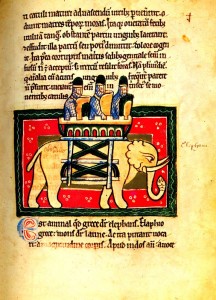 Elephant /elephas/ 10×6.8 cm
In the bestiary the story of the elephant begins with the story by Isidor, who derived the meaning of the name from the Greek

/mountain/. Isidor spoke about the great size of the animal, its great intellegence and good memory, its usefulness in battle and also about the enmity between the elephant and the dragon. He also mentioned its longevity /XII.II.14—16/. Isidor’s information is derived from descriptions by Pliny who mentioned the animal’s chastity /VIII.5.5/ and also the enmity between the elephant and the dragon /VII.12.12/. Many of the medieval ideas about the elephant are to be seen in writings by Aristotle /11.498 a/, Diodore of Sicily /111.27/ and of Strabon /XVI.4.10/.
The interpolations from Isidor, are being expanded by information from “Physiologus” relating to the elephant’s main qualities. When the animals want to have a baby, the mother and father go east to look for a mandragora fruit, exciting sexual desire. The mother elephant delivers the child while standing in a lake, and the father elephant while she is in labours guards against a dragon who is inimical to elephants. The elephant cannot lift himself from the ground if he falls. So he leans against a tree while he is sleeping. If the hunters would cut the tree down the elephant would fall. As he is falling he calls out for help. But even twelve elephants cannot lift up the one who has fallen down, and a very small elephant can help him by creeping under his body. The mother and the father elephants who have eaten of the mandragora fruit are likened to Adam and Eve who have eaten of the forbidden fruit and Eve bore Cain upon the waters of tribulation. The dragon symbolizes the DeviL The small elephant is a symbol of Jesus Christ giving a new life to the old Testament, which the twelve elephants, i.e. the twelve Prophets, failed to save.
Philippe de Thaun /1415—1614/ and Guillaume le Clerc /3175—3296/ repeat the symbolic interpretation of the elephant. Albert the Great /XXII.I.37/ and Brunetto Latini /I.V.189/ mention the enmity between the elephant and the dragon. The latter enriches the story by describing such habits of the elephant as his adherence to the day-and-night division, observed by Man, the stories about the elephant told by Friedrich II and the means of artful stratagem employed by Alexander the Great in his elephant-mounted battle against the Persians. Completing the narration about the elephant, the bestiary presents the story derived from Isidor /XVII.IX.30/ in which the emetic and narcotic properties of mysterious mandragora are described. Guillaume le Clerc gave a detailed description of the properties of mandragora /3297—3332/. The text on the elephant is illustrated by a miniature traditionally showing the animal with a whole military fortification on his back. In the bestiaries of the thirteenth century this depiction has many interesting details in it. Illustrations to the other tales on the elephant are by far rarer to see. In Romanesque art the stylization of animal figures began with their representation on the Byzantine cloth in the tenth and eleventh centuries, where, after the Sassanid fashion, the elephant had the lion’s paws and fan-like ears.