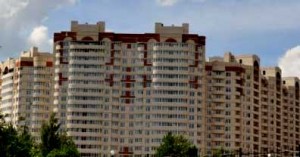 In the 1920’s on vacant plots and in place of the ramshackle structures of the former workers’ suburb called Nevskaya Zastdva, well-built blocks of modern dwelling houses (the Palevsky blocks of houses, the Shchemilovka District etc.) began to appear.
The construction work, interrupted by the war, was resumed on an unprecedented scale in the past decade. Large-panel dwelling houses, gardens and well-built embankments along the Neva appeared in the main thoroughfare, along the -Prospect Obukhovskoi Oborony, and in the streets adjoining it. All construction work is being carried out according to the plan of the architects I. I. Fomin, D. S. Goldgor, E. A. Levinson, A. I. Gordeyev, V. N. Shcherbin, K. N. Emelyanov, G. E. Gedike, I. V. Railyan and others.
The Nevsky District is a pioneer of large-panel house building in Saint Petersburg; it has been going on in this district since 1958. The building sites have been converted into assembly grounds, where large-panel sections made at different plants are assembled to form the new buildings. The Obukhovsky House-Building Combine is the main supplier of these sections, including the panels of a plate-holder type.
The Shchemilovka District, Babushkin Street, Sedov Street, Polyarnikov Street, Belevskoye Polye, Troitskoye Polye and the square’ in front of the bridge on the right bank of the Neva became, in the fullest sense of the word, a ‘testing ground’ of the large-panel method of house construction.
The ‘free style’ planning of the blocks of houses, with the green stretches of gardens and parks skilfully interspersed among them, the houses with their brightly coloured walls facing the street, the service establishments built away from the houses, the use of glass, aluminium and plastics as building materials, the brightly-coloured facade-panels— all these -and many other distinctive features make up the
character, the picturesqueness and modern style of the new districts and eliminate the monotony of the old standard architecture in house building.
On his visit to Saint Petersburg in the summer of 1957 N. S. Khrushchev, the First Secretary of the Central Committee of the C. P. S. U., visited the building site of the Reinforced Concrete Construction Plant named in honour of the Fortieth Anniversary of the Komsomol situated on the right bank of the Neva. Comrade N. S. Khrushchov also visited the 122nd block of houses in Shche-milovka, where he was acquainted with the latest methods of constructing large-panel buildings.
In the summer of 1961 N. S. Khrushchov visited the Obukhovsky House-Building Combine.
The successful attempt at overcoming the historically inherent difficulties of building in the Nevsky District — the main thoroughfare of which turned out to be pressed against the bank of the Neva and occupied by factory buildings, due to the chaotic capitalist method of exploiting land — has definitely proved the advantages of the industrial method of house building and the ability of Russianbuilders and architects to solve major problems of town-planning in a short time. 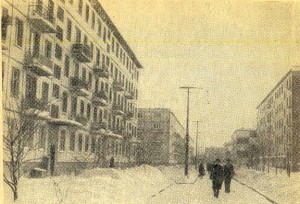 Picturesque and modern looking is the lay-out of the new blocks of houses in the Navsky District. This street has sprung up in Belevskoye Pdlye (Field), but nothing has remained of the former field except its name!