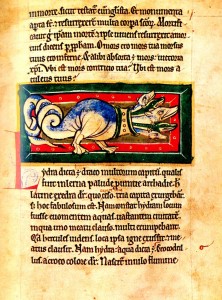 Hydra /hydrus, hydra/ 10×4.6 cm
The second chapter about the hydra reproduces the text about the hydra of Lerne by Isidor and repeats the story about the hydra’s fight with the crocodile. Such repetitions are not infrequent in medieval compilation since the latter derived material from several different sources. The inclusion of the second chapter about the hydra was partly due to the influence of Isidor who in his section on snakes devoted several chapters to all kinds of hydras /XII.IV.21, 22, 23/. However, the compilers removed the chapter on the hydra from the section on snakes and placed it after the first tale about the hydra, wishing to achieve a better arrangement of the texts. On the other hand, the presence of the second chapter on the hydra, following the first one repeating the story on the fight with the crocodile, is obviously due to the fact that in the original “Physiologus”, as well as in its Eastern versions and writings by Isidor /XII.II.37/, the tale of the fight was followed by a chapter on ichneumon

whose description is very close to that of the hydra. The ichneumon is said to be the dragon’s fierce enemy whom he fights after covering himself with ashes. The ichneumon symbolized Christ who clad himself with fleshy substance to conquer the Devil. In Latin “Physiologus” and the bestiaries this part of the narrative was included in the second chapter about the hydra, though the name “ichneumon” was lost in the course of time. In the many-headed dragon-hydra /when one of its heads was cut off, three heads would grow in its place /Isidor and the compilers of bestiaries saw the origin of fairy-tale imagination. Like some distant echoes of a prehistoric animal, like the fabulous Russian Fire Dragon, the five-headed Dragon of the manuscript is undoubtedly one of the most fantastic images in the bestiary as it is reminiscent of the Apocalyptical vision of the seven-headed dragon and its portrayal in medieval sculpture and painting.