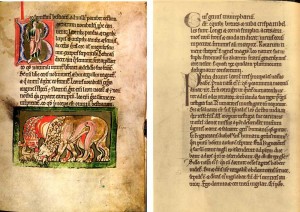 The lion, the king of all animals, opens the gallery of images, presented in the bestiary. He is a symbol of Christ /Revelation 5:5/ and a symbol of Evangelist Mark /Revelation 4:7/. At the same time, together with the asp, the dragon and the basilisk the lion symbolizes Satan /Psalms 90:13/.
The lion’s traits, interpreted in “Physiologus”, are mentioned in writings by Aristotle /VI.579. B.8/, Aelian /IX.30/, Plutarch /Quaest. conviv. IV.5.2/, Pliny /VIII. 16. 1 — 18/, Solinus /27. 13—16/, Lucretius /De Rerum Natura, IV, 710— 717/.
In the Saint Petersburg bestiary the story of the lion opens with a quotation from “Proverbs”. “Leo fortissimus bestiarum…” “the lion which is the mightiest among beasts and could yield to none” /Proverbs, 30:30/. Then follows the text on the beasts, taken from the work of Isidor /XII.II.1—3/ and the description of the lion’s three main qualities associated symbolically with the image of Christ and traceable to “Physiologus”:
1/ the lion is setting out for a walk in the mountains, disguising his spoor behind him with his tail, so that the hunters cannot track him — an analogy to the invisible lion-Jesus Christ, covering up his tracks, hiding his divinity. 2/ the lion is asleep with his eyes open, which is an analogy with Christ who is always awake. 3/ the lion’s whelps are still-born but three days after their birth the lion breathes life into them, which is an analogy with the Ressurection of Christ three days after the Crucifixion. Adjoined to this legend is information derived from Isidor of Seville /XII.II.6/ and St.Ambrose /6.6.37/. The lion never gets angry unless he is wounded, he spares the prostrate, eats a monkey to cure himself, he fears a white cock and the poisonous sting of a scorpion, he terrifies all other animals by his roar. Then follows the description of the fantastic creature called leontophonte taken from Isidor /XII.II.34/. The ashes of a burnt leontophonte, when added to a lion’s meal, would kill the king of all beasts. The lion’s traits are given a poetical interpretation in the Bestiary of Philippe de Thaun /25—370/ and Guillaume le Clerk /137—238/. “The Bestiary of Love in Verse” speaks of the nobleness of the lion who never attacks the weak /562 and further on/. Pierre of Beauvais makes the story of the lion sound absolutely fantastic as he asserts that the lion cannot stand a human look and that the lioness delivers her young through her mouth /11.110/. Brunetto Latini adds still new features to the lion’s image /I.V.176/. In the miniatures of the bestiary the stylization of the lion’s figure reminds one of representation of the animal on Byzantine cloth and articles of applied arts, which in its turn was the elaboration of ancient Mesopotamian motifs. The bases and capitals of columns, the facade reliefs, the handles of church gates, and the aquamaniles of the Romanesque and the Gothic epochs often present the stylized lion’s figure as a symbol of might and power. The traditional illustration showing the lion breathing life into his cubs spread far beyond the manuscripts on animals and appeared in liturgical books as well as in mural painting.