Memorial to the Victims f the 9th of January Massacre: Preobrazhenskoye Kladbishche (Cemetery)

In the dead of night on January 10, 1905, following the Bloody Sunday, the police brought to the cemetery the corpses of the massacred workers. Wrapped in sack-cloth the corpses were thrown into hurriedly dug pits.
On the day of his return to Russia from exile (November 8, 1905) V. I. Lenin went to the cemetery to do homage to the memory of the shot workers. In 1931 a monumental memorial designed by the sculptor M. G. Manizer and the architect V. A. Vitman was unveiled. It is remarkable in its laconic impressiveness. 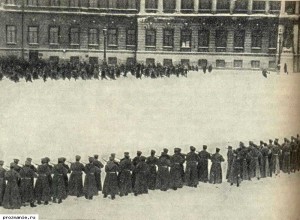 The shooting of demonstrators in Palace Square. January 9, 1905 photo.