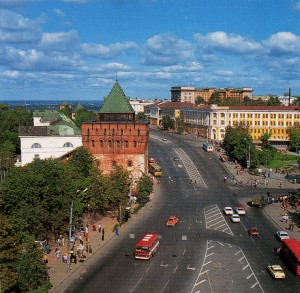 What is so attracting in the city ? Nizhny Novgorod is wonderfully original ancient center of Volgaregion: it was founded at the begining of the XIII century at the confluence of two big rivers – the Volga and the Oka. A sign of an ancient city of Russia is the Kremlin on the high Volga bank. There are administrative buildings here, where the governor of the province and the mayor of the city, the province law assembly and the City duma are working now, where the picture gallery and the concert hall of the philarmonic society are having visitors, in the Kremlin there is burning the eternal fire in memory of the fallen soldiers of the Second World War with Hitler.