Museum of Folk Architecture and Life of Ukraine 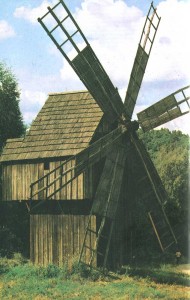 The open-air museum of folk architecture and life of the Ukrainian was founded in Kiev in 1969. One of the world’s largest ethnographic complexes, it covers an area of 150 hectares and has some 300 fine examples of folk architecture located and reproduced as a result of extensive investigations into the history of the art, culture and traditions of the Ukrainian people.
The exhibition of the pre-revolutionary period is divided into six sections according to the historic and ethnographic regions of the Ukraine: “Middle Dnieper Area,” “Sloboda and Poltava Regions,” “Podillya,” “Polissya,” “The Carpathians” and “Southern Ukraine.”
On the museum grounds there are farmsteads and subsidiary structures, public buildings, churches and windmills typical of pre-revolutionary villages.
A path through a field leads to the Middle Dnieper Area exhibition, where folk architecture of Kiev and Cherkassy regions is represented. To the left of the path stands the hut of a landless peasant who was compelled to work for his landlord. Both the exterior and the interior of the house bespeak extreme poverty. Such farmsteads were usually located by the roadside on the outskirts of a village.
In the centre of the exhibition rises a church, and just opposite it stands the parish school. Guides tell visitors about the teachers who worked selflessly for the cause of public education despite strong opposition from the czarist officials. Soon this section will be complemented by other structures from that period: a village shop and a priest’s estate.
The section on Sloboda and Poltava regions portrays the bygone days of Kharkov, Poltava, Voroshilovgrad and northern Donetsk regions of the Ukraine, as well as western Kursk and Voronezh regions in Russia.
People settled there seeking a better life. They tried, as far as possible, to make their homes not only comfortable but beautiful as well. The museum boasts some of the finest examples of folk architecture from this region. The walls of these white-washed cottages are painted in bright patterns. Inside the cottages are fine examples of local folk crafts — woodcarvings, decorative paintings, and rushniks (embroidered towels) — which catch the eye of every visitor.
The Polissya section, situated in an oak grove, shows part of a Polissya village including a windmill, a smithy, a cottage dating from 1587, the original house of a beekeeper, and other fascinating exhibits like the wonderful collection of original wickerwork and wrought-iron articles as well as embroidery, woodcarving and pottery.
Podillya includes Vinnitsa, Khmelnitsky, eastern Ternopol and northern Odessa regions. The most striking feature of the folk architecture of this area is the painting which decorates not only the interior but also the exterior walls of the cottages. This section presents a farmstead belonging to a middle peasant from the village of Kadiyevtsi, Khmelnitsky Region. Other structures include a so-called burdei — a poor peasant’s dilapidated hut, a tavern built 200 years ago, and a cottage with a water-mill.
The section on the Carpathians is especially interesting and picturesque due to its location and landscape. It features the most typical examples of folk architecture of this region as well as extensive exhibits of the creative work of local craftsmen.
The Ukraine exhibition is now under construction. It boasts a unique monument of folk architecture — a stone windmill from the Kherson Region. Furhermore, work upon a section on the architecture of Old Rus is underway.
The exhibition on the folk architecture and life of socialist village deserves special attention. The structures brought from the twenty-five regions of the Ukraine are quite varied, for each region has its own peculiarities and customs. This section makes evident the increasing well-being of the Soviet people and the constant concern the Communist Party and Soviet Government show in their efforts to meet the material and intellectual needs of rural working people.
The museum’s collection numbers over 40,000 exhibits, including clothing of rural residents, women’s adornments, articles of leather, pottery, rugs, textiles, folk paintings and embroidery from all the regions of the Ukraine.
The Museum of Folk Architecture and Life is one of the most fascinating museums in the Ukraine. It allows the visitor to get better acquainted with the past and present of the Ukrainian people, to get a clear picture of the tremendous changes which have taken place in their life styles, culture and customs. And last but not least, here one can fully appreciate the wonderful treasures of folk art in the environment for which they were created.

June 7, 2013
Tags: Museum of Folk Architecture and Life of Ukraine.

The mill of the village Levinta. Chernivtsi region. The end of the 19th century.
June 13, 2013

An architectural monument – the church of the village Kanora. Transcarpathian region. 1792
June 13, 2013
Go to Top