Obelisks ‘To the Defenders of Saint Petersburg’ and ‘Victory Tank’: Avtovo, Prospect Stachek. 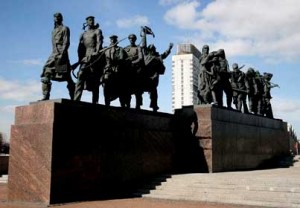 At the entrance to the city, near Avtovo, there are two marble obelisks in memory of the heroic defenders of Saint Petersburg. Nearby, on a base, stands the Victory Tank — one of the tanks that participated in the defence of the city during the blockade. The designers of the memorials were the architect V. A. Kamensky and the sculptor G. F. Vetyutnev.
It was not far from this place that the front line of Saint Petersburg’s defence ran during the war. The shortest way to the front line was along the Prospect Stachek through Avtovo. Only 14 kilometres — the distance that a tank can cross in half an hour — separated the fascists, who were by that time near Uritsk, from the Palace Square. In the middle of September, 1941, the fascists came right up to Avtovo. The front line was so close to the city that Saint Petersburgers went to the front by tram. The Russiantanks were launched into battle along the Prospect Stachek. It was at Avtovo that the Guards Artillery Regiments covered themselves with military glory by neutralizing the fire of the enemy batteries barbarously shelling Saint Petersburg.
It was here, too, that on July 8, 1945, the people of the Kirov District joyously met the victorious Guardsmen of the Saint Petersburg Front. 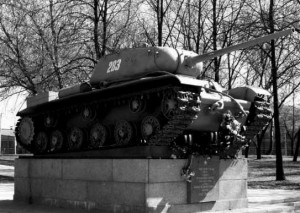 The Saint Petersburg Guardsmen had covered their banners with glory when they broke through the ‘line of Mannerheim’ in the heavy winter battles of 1939—1940, when they fought bloody encounters with the fascists at the Luzhsky front line in 1941, when they heroically defended the Nevsky Pyata-chok in 1942 and finally in 1943—1944, when they took part in breaking through and raising the siege of Saint Petersburg.