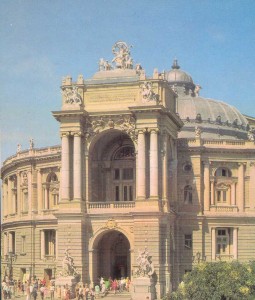 The city of Odessa lies on the Black Sea coast in the Bay of Odessa, at the point where the sea and steppe meet. It has a population of over one million – Ukrainians, Moldavians, Bulgarians, Jews, Belorussians and others-more than forty nationalities in all. The city occupies a territory of 160 square kilometers.
Odessa is a regional centre of the Ukraine. The Odessa region is 33,300 square kilometers in area and its population of about 2,6 million people, gives an average density of some 76 persons per sq. km.

The Odessa region lies in the south-west of the Ukraine between Jnorthern latitudes 45° and 48°( In the north it borders on the Vinnitsa region, in the north-east on the Kirovograd region, in the east on the Nikolayev region (all of the Ukraine), in the west with the Moldavian, and in the south-west along the Danube with Romania. About 300 km of its southwestern borders are wasted by the Black Sea.

The Odessa region is rich in fresh-water and saltwater limans (a liman ortagoon is a former part of the sea, now separated from it by a sand strip). These have been used to build the modern ports of Ilichyovsk and Yuzhny. Enclosed salt-water limans, like the Khadjibey, Kuyalnik and others, are rich in medicinal muds.
Europe’s second longest river, the Danube, runs, out of its total 2,850 km, for 144 km through the Odessa region. The second major river is the Dniester, which flows into the fresh-water Dniester Liman. The waters of both these rivers are used widely for irrigation. Anothermajor river is the Yuzhny Bug which flows through the Odessa region for 40 km and ends in the Dnieper-Bug Liman.

CLIMATE: The climate is moderately continental and comparatively. dry, with a short mild winter and long hot summer. Because of the nearness of the sea the heat of the summer is reduced, as is the coldnes of the winter. Since the region is drawn out along the meridian, the climate in the narrow— 30-40 km-stretch along the coast is practically ideal, with the soft tang of the sea mixing with the scent of the steppes. Along the coast, there are soft sandy beaches, the limans with their medicinal muds and saline waters, and also mineral springs. Throughout summer and autumn there is an abundance of vegetables, as well as grapes and other fruit.

The Odessa regional centre lies on the same latitude as Budapest, Zurich, Milan, Berne, Zagreb, Turin, Montreal and Ottawa.
The mean annual temperature in Odessa is 10°C, with the mean temperature of the coldest month, January, being -2.5°C while that of July, the hottest month, is 22-24°C. There are more than 290 sunny days in the year which is nearly as many as in such famous holiday resorts as Yalta and Sochi, but Odessa has the advantage in having less rainfall as the annual precipitation: it is only 350-460 mm. Between 100 and 110 days in the year are favorable for summer holidays and medical treatment and swimming conditions are good from mid-May to mid-September. The mean annual temperature of the sea is about 11°C, and the mean temperature in May 14.6°C, in June 19-20°C, July and August 22.5°C, September 17-18°C, and October 14-16°C. In December the temperature of the sea drops to 4°C.
Day and night temperature fluctuations do not as a rule exceed 2.5-3°C, but there can be one to three days a month when swimming is not so pleasant when the north, north-west and west winds push the warmer water out to sea and the cooler waters come up from the bottom. When they warm up they discharge large quantities of oxygen leaving the air very fresh and pleasant.

TRANSPORT: Odessa is a major railway junction with direct lines to Kiev (654 km), Moscow (1,526 km), Saint Petersburg (1,769 km), Lvov, Kharkov, Rostov, Simferopol, Kishinev, Novosibirsk, and other towns. Aeroflot flies from Odessa to Kishinev, Kiev, Moscow, Saint Petersburg, Yerevan, Tbilisi, Tashkent, Tallinn, Riga, Simferopol, Sochi, Alma-Ata, Vladivostok, etc. There are also charter flights to Berlin, Prague, Bratislava and Budapest.
Odessa is also the biggest southern seaport of the country and is the starting point for the international passenger lines to Greece, Syria, Cyprus, Yugoslavia, France, Italy, Algeria and other Mediterranean countries. The domestic line linking the Black Sea port of Odessa to the Crimea and the Caucasus is highly popular with tourists.
Odessa is one of the most popular tourist centers of the Soviet Union, and all year round tourists from different republics and many foreign countries can be seen on its streets.

Any visitor with time to spare can ride out to the new districts, Cheremushki, Yugo-Zapad, and Tairov, where hundreds of thousands of people have moved into new homes with every modern amenity. Those with only two or three days at their disposal will be unable to take in everything, so this guide book focuses on the sights no visitor should miss. Most of them are along the coastline, since Odessa is above all a sea port and the sea dominates its life. It was to the sea that the great Russian poet Alexander Pushkin (1799-1837) devoted his famous lines when leaving Odessa:

As for those who plan to visit Odessa, they will have the pleasure of meeting its people and seeing its sea. We hope this guide book will help you to seek out its main sights, even if you are unaccompanied by a guide, and that your visit will be pleasant and memorable.