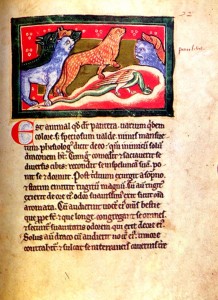 Panther /panthera, pantera/ 10X6 cm
Panther is the loveliest of all animals in the medieval bestiary. She is gentle and beautiful. “Physiologus” spares no colours describing its bright coat, which he compares to the many-coloured robes of Joseph and the queen in gold of Ophir /Psalms, 44:10/. In the bestiary the story taken from “Physiologus” is followed by the description from Isidor /XII.II.8—9/. The only enemy of the panther is the dragon. When she has eaten her full, the panther sleeps for three days and nights. As she wakes up, she howls loudly and a very sweet smell comes from her mouth. All the animals, attracted by the sweetness of that smell, follow the panther whereever she goes. Only the dragon is smitten with fear in his hiding place.
As compared with the early versions of “Physiologus”, Latin version “B” of the bestiary presents a more detailed description of the dragon and elaborates on the panther’s symbolic association with Christ, emphasizing that the many-coloured coat of the animal symbolizes “the manyfold wisdom of God” /Eph. 3:10/. The dragon is associated with the Devil. The etymological explanation of the word “panther”, given in the bestiary, is taken from Isidor /XII.II.8/ who relies upon the story from “Physiologus”, missing in version “B”, about the friendship between the panther and other animals, saying that the animal has got its name “panther since it is the friend of all

animals. The bestiary, following Isidor /XII.II.9/, who in his turn proceeded from Pliny /VIII.17.23/, says that the panther can bear only one baby because during the birth the baby tears the womb with its claws. Philippe de Thaiin /461—580/ and Guillaume le Clerc /2029—2068/ give the description of the panther and her symbolic features. “The Bestiary of Love in Verse” /1305 and further on/ gives a secular, specifically gallant interpretation of it. Brunetto Latini /I.V.I96/ repeats the facts given in the bestiary but avoids the symbolic interpretation of the animal. Aristotle /IX, 612 a, 13/ Pliny /VIII.17.23/ and Plutarch /De soil, anim. 24.976/ mention the panther’s sweet breath. The interpretation of this property was gradually changing. Aristotle believed that the panther attracted animals by her smell to catch them. Leonardo da Vinci in his bestiary returned to the antique explanation as he said that the panther attacked animals when they were admiring her beauty /manuscript H, ff. 22 v., 23/.