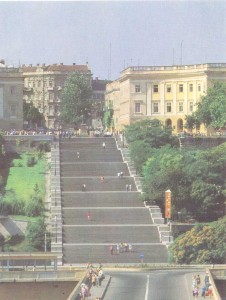 The famous Potemkin stairs leading from the square to the sea and Ulitsa Suvorova (Suvorov St.) was designed in 1825 by F. Boffo. The actual construction lasted from 1837 to 1841. Initially the steps were built out of a greenish-grey sandstone brought especially for that purpose from Trieste, but as the years passed erosion took its toll and in 1933 the sandstone was replaced by rose-grey granite and the landings were covered with asphalt.

The height of the stairs between Ulitsa Suvorova at the bottom and the boulevard at the top is 27 m, their total length being 142 m. Looking down from the top, the steps themselves become invisible, only the landings can be seen. On either side of the stairs there is a stone parapet and the two appear to run parallel. This, however, is an optical illusion, because in reality the width of the stairs of the bottom flight is practically double that of the top flight; 12.5 m at the top and 21.6 m at the bottom.

To appreciate fully the architect’s vision, a walk down these steps to the seafront is a must. On both sides a park has been laid out. There are 192 steps, and from each one there is an excellent view of the Richelieu monument and the two concave buildings. Looking at the stairs from below one can see no landings at all. 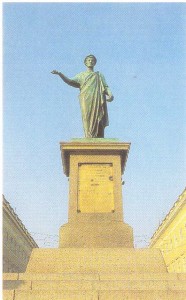 Originally there were two hundred steps, but eight of these were lost under the sand when the port was being extended.

It was at the foot of the Potemkin stairway that the first piles for the future port were driven in by Suvorov’s soldiers. This is commemorated by the plaque on the wall of the passenger Sea Terminal. It reads: “The first installations, from which began the construction of the port and city of Odessa were laid here on August 22nd (September 2nd), 1794.”

The Potemkin stairway has witnessed many events. On the evening of June 14th (27th), 1905, the battleship Knyaz Potemkin-Tavrichesky entered the Odessa harbour proudly flying the Red Flag. Meanwhile in the city the workers were on strike and there was fighting at the barricades. Despite the repressions, the working people of Odessa gave an enthusiastic welcome to the revolutionary vessel that had hoisted the Red Flag. Port workers supplied the vessel with coal, food and medicine while police and troops were called out to disperse the vast crowds that had gathered in the port and on the boulevard. No sooner had the police scattered the crowd, it reformed again.

When the sailors from the Potemkin brought ashore the body of Grigory Vakulenchuk, one of the leaders of the uprising who was killed by an officer, the workers of Odessa gathered to pay their last tribute to the hero. Suddenly there were cries of, “Fire! The port is ablaze!” The crowd stampeded in panic and at that moment the troops opened fire. The authorities fearing the turn the revolutionary events were taking had instructed agents-provocateurs to set fire to the warehouses in the port and when panic set in, the authorities used the pretext of fighting the fire to launch a bloody massacre. Hundreds of people lost their lives on the night of June 15th, some were killed, some wounded, others perished in the flames or were drowned in the sea. The stairs, wharfs and streets were stained with blood.

The Potemkin had to leave Odessa and make its way to Constanta but the people honoured the memory of the heroes. The stairs were named the Potemkin stairs and have become a symbol of the city. The eminent Soviet film producer Sergei Eisenstein commemorated this page in history with his famous film “The Battleship Potemkin “.

In 1970 an escalator was built on the left side of the stairs. To continue our excursion, let us ride up to the boulevard again (a ticket costs three kopecks).

At the top let us stop at house  the Seamen’s Palace of Culture named after Maxim Gorky. It used to be a private residence, built in 1829-1830 and also designed by F. Boffo. During the war the building was damaged, but it was restored and rebuilt inside in 1949-1951.

At the end of 1917 and the beginning of 1918 the building served as the headquarters of Rumcherod, the Executive Committee of the Soviets of Soldiers’ and Sailors’ Deputies of the Romanian Front, the Black Sea Fleet and the Odessa Military Region, which played

an important part in the struggle for Soviet power in Odessa in January, 1918.

Since 1924 the palace has belonged to the seamen. This is where they and their families can spend the evening, relax, watch a film or a performance of amateur groups, including the dance group “Black Sea” known far beyond the confines of Odessa. Exhibitions are organised here, and get-togethers of crews from different ships. There is one permanent exhibition of maritime flora and fauna brought back by the sailors from their trips and this is open on Saturdays and Sundays from 12 to 17 p.m., admission free. The Seamen’s Palace is also responsible for cultural and educational work among the crews of the Black Sea Shipping Line.