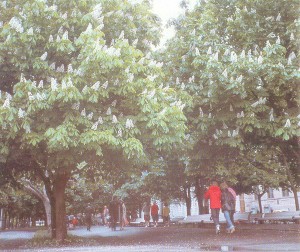 That is why the square at the beginning of the Primorsky Bulvar, open to the sea and the skies, was chosen as the site for the bronze bust sculpted by A. Kovalev of Valentin Glushko, the father of Soviet rocket engines, twice Hero of Socialist Labour.

Chestnut and linden trees line the boulevard. Most of its buildings went up in the first half of the 19th century including those that form the ensemble of its central part which is a semicircular square with two concave buildings at the end and the monument to Due de Richelieu, Odessa’s first Mayor, in the middle. The Duke emigrated from France during the Great French Revolution and was appointed Governor-General of the Novorossiisk Area. He did a great deal for the development of Odessa and his monument was designed in 1826 by Ivan Martos, a talented Russian sculptor, who also designed the first secular monument in Russia, that of the national heroes Kuzma Minin and Dmitri Pozharsky which stands on Moscow’s Red Square.

The bronze figure of the Duke and three bronze bas-reliefs symbolizing agriculture, justice and trade were made from the models of Martos by I.Yefimov. The iron cannon ball wedged in the pedestal has a history of its own, but more about that later. For more than 150 years the bronze duke has stood at the sea gates of the city and welcomed all visitors. A giant stone stairway leads from the monument to the beach.

The idea of an architectural ensemble with a broad flight of stone steps leading to the sea which links the high bank with the low shore and provides a gateway to the city, belongs to the well-known St. Petersburg 19th century architect Avraam Melnikov. However, the idea was only fully completed in our time when the passenger port was built at the foot of the stairs.

In keeping with A. Melnikov’s plan, the symmetrical buildings on either side of the square were built in the style of the Russian empire. The right-hand building (if you stand with your back to the sea, house No.7) has five open arches with white Ionic pilasters two storeys high. An intricate balustrade in white stone lessens the sharp contrast between the dark massive cornice and the lighter tones of the sky.

The two upper storeys are decorated with basreliefs, but their form and proportions remain simple. They define the overall image of the building which was completed in 1827.

It was this building that housed the first public library in Southern Russia (today it houses the Gorky Science Library). Later the building housed the law courts. A memorial plaque to the left of the entrance notes that it was in this building that the Tsar’s military court sentenced to death the revolutionary Grigory Kotovsky. His sentence was later commuted to convict labour for life, but after the revolution he was set free and became one of the legendary heroes of the Civil War.

At present the building houses the Odessa Office of “Soyuzvneshtrans”, the organisation dealing with foreign trade transport operations.