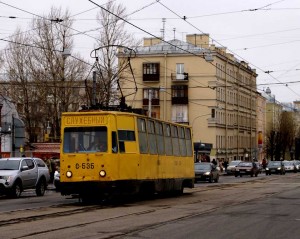 In 1894—1906 this building housed the Smolensk Sunday Evening Classes for the workers of the Nevskaya Zastava. The Social-Democrats N. K. Krupskaya, P. F. Kudelly and L. M. Knipovich were among the teachers. The classes became a conspirative centre of Marxist propaganda. Many of the pupils of the school, among them I. V. Babushkin, the brothers Bodrov, P. S. Gribakin, B. S. Zhukov and others, were members of the workers’ circles conducted by V. I. Lenin.
In the winter of 1894—1895 Vladimir Ilyich would visit the school to see how sociology and economics were taught there. In 1905—1906 discussions were organized at the school, and V. I. Lenin spoke at the meetings in opposition to the Mensheviks and the Social-Revolutionaries.