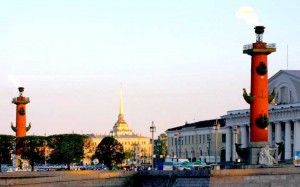 In 1806 two column-shaped lighthouses adorned with rostrums (sculptural replicas of ships’ prows) were built on the Spit of Vasilyevsky Island. The columns were designed by the architect Thomas de Thomon. The mighty figures, seated at the foot of the columns, personify Russia’s trade routes — the Neva, the Volkhov, the Volga and the Dnieper. These sculptures were the work of the sculptors S. S. Pimenov, I. I. Terebenev, V. I. Demut-Malinovsky and others. The columns served as beacons for ships going up the Neva.
In the summer of 1957, during the celebration of the 250th anniversary of the foundation of Saint Petersburg, the signal lights on top of the Rostral Columns were re-lighted. The lighthouses crown, as it were, the architectural ensemble of the Spit in Pushkin Square, which was reconstructed in 1925—1926 to the design of the architect L. A. Ilyin.