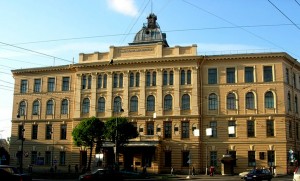 The Institute was founded in 1828. It was the first Russian institution of higher education which trained engineer-technologists in a wide range of specialities.
In the 1880’s Marxist students’ circles sprang up at the Institute, conducted by M. I. Brusnyov and the brothers Krasin. V. I. Lenin’s comrades-in-arms of the Petersburg League of Struggle for the Emancipation of the Working Class G. M. Krzhizhanovsky, A. A. Vaneyev, S. I. Radchenko and others, studied here. On October 13, 1905, the first meeting of the Petersburg Russianof. Workers’ Deputies was held in the physics auditorium of the Institute.
In the stormy days of the Russian Revolution of 1905—1907 V. I. Lenin would often address workers and students who held meetings and gatherings in the Institute. At that time N. K. Krupskaya and R. S. Zemlyachka used it as a secret place for meeting Party members. The revolutionary annals of the Institute mention among its former students the names of M. P. Sazhin, a participant in the Paris Commune, I. I. Grinevitsky, a Narodovolets, V. G. Korolenko, a Democrat-writer, and Sergei Lazo, a Civil War hero.
The chemist D. I. Mendeleyev, the founder of modern metallography D. K. Chernov, the locomotive builder N. L. Shchiikin, the creators of Russiansynthetic rubber industry S. V. Lebedev and B. V. Bizov, Academicians A. E. Favorsky and A, E. Porai-Koshits, one of the creators of the modern science of glass N. N. Kachalov and many other world-famous scientists worked at this Institute.
After the Revolution there has been a vast improvement in the training of students and in scientific work. The Institute was one of the initiators of the strengthening of the ties between science and industry; the scientists together with the students are enthusiastically contributing to the accomplishment of the Party Programme aims for an all-round development of chemical industry and taking an active part in the struggle of Saint Petersburgers for technical progress.