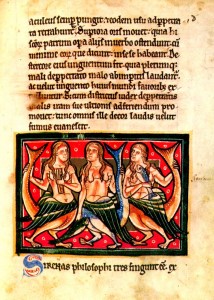 “The sweet singing… of perilous sirens”, the fairy charms of which the ingenious Odysseys was lucky to escape, are viewed by the medieval mind as the incarnation of a worldly boon which is ruining human soul. In the course of their long, ages-old existence the treacherous and alluring sirens of the ancient legendary tradition underwent considerable changes. But their living in the sea is the element that remained intact. “The death-dealing island of sirens”, said Homer, relating the wanderings of Odysseus. Their bewitching singing luring seafarers /Odyssey, Song XII/ is another surviving feature. Homer does not give any desciription of sirens. According to the Greco-Roman tradition, the siren is half-woman and half-bird. /Ovid, Metamorphoses, v.552/, and medieval culture accepted it as such. In the text by Isidor /XI.III.30/ they are still half-birds, while in Pseudo-Hugh /11.32/ they appear as half-fishes.
In folklore sirens are associated with mermaids and undines. In the Saint Petersburg Bestiary the text about the sirens is detached from that about the onocentaur, while in “Physiologus”, in accordance with the indication made in the oracyle of Isaiah /Is. 13:21,22/, the sirens and the onocentaur are in the same chapter. The story of the bestiary emanates from the text by Isidor /XI.III.30/ who placed the sirens in the section about human monsters, depicting them as having the features of women, birds, and fishes. The bestiary introduced considerable alterations into the text of “Physiologus”, enriching it by a detailed description of their appearance and the sound of their bewitching singing, the wonderful sweetness of which lulled shipmen to sleep. In the bestiary the tale of the sirens told in the fashion of version “B” of Latin Physiologus is followed by a lengthy moralization about the evil influence of theatricals, which may have first appeared by the time of the early Latin translations of “Physiologus”, that is, by the fourth or fifth centuries.
In the bestiaries of Philippe de Thaiin /1361 — 1374/, Gervasius /305—334/, Guillaume le Clerk /1053—1070/, Pierre of Beauvais /11.172/ the tale of the sirens is given in a symbolic and didactic vein. Brunetto Latini treated them as irrational maidens and added a few details about a snake siren /I.V.137/. Albert the Great /XXIV.I.119/ placed sirens in the section on fishes and treated them as the “monsters of fairy-tales”. In his vivid depiction of sirens Albert the Great seems to be following the miniatures of the bestiary as he shows them ugly-faced, long-haired, their breasts hanging loose. Up to the end of the eleventh century sirens were depicted as half-birds. Sirens with fish tails first appeared in miniatures and reliefs of the twelfth century, though the image of half-bird sirens was still preserved and quite often they existed side by side. The usual depiction of three sirens on the miniatures of the bestiary originates from the description by Isidor /XI.III.30/ in which one siren is singing, the other is playing the flute and the third-playing the lyre. The sirens of the medieval bestiaries were pictured with musical instuments, or with a fish as a sign of their marine habitat, or with a comb or a mirror, the attributes of female art of seduction and witchacraft, or with a snake. In the Saint Petersburg Bestiary one of the sirens is holding a flute, the other two — fishes.