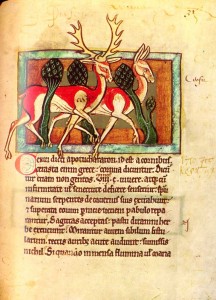 Stag /cervus/ 10.2X6.1 cm
То the text derived from Isidor /XII.1.18—19/ the bestiary adds the narrative from “Physiologus” about the stag which drove a snake away from its hole and thus came to be associated with Christ defeating the dragon. The idea that the stag and the snake are enemies comes from Oppian /Cinegetica, II/ and Pliny /XXXII.5.19/. The stories of the bestiary and the stories by Pseudo-Hugh /11.14/ say that the stag was restored to health upon eating the snake, that it lives as long as eight hundred years and is cured by ditanny; it swims across the river now on one side, now on the other not to get tired. The “Bestiary of Love in Verse” /1120,1140/ mentions that a stag can become young again after lying on the ants’ hill. To the symbolism of the stag killing the snake and thus coming to signify Christ the bestiary adds another interpretation based on the text of David’s song of Ascents /Psalms 120:1; 122:1/ according to which the mountains which the stag climbs are symbolic of apostles and prophets. In medieval arts the stag is often to be seen in the scenes of hunting decorating church reliefs and the edges of late Gothic manuscripts.