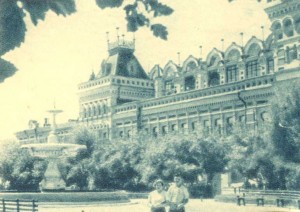 Nizhniy-Novgorod was the centre whence thе popular levies under Minin and Pozharski rose up in defence of Moscow against invaders from the west.
The Volga opened up to Nizhniy-Novgorod the rich markets of the East. This contributed to the rapid growth and prosperity of the city, which was in no little measure enhanced by the famous Fair which had played such an important part in the trade with the East.
Although an important commercial center, the town before the Revolution was an extraordinarily ill-appointed place, as far as municipal amenities were concerned. One of the streets, called ironically the “Millionaire Street,” was the abode of the riff-raff. The play by Maxim Nizhniy-Novgorod “The Lower Depths,” depicting life in the slums with such lurid force, bears a striking resemblance to the “Millionaire Street” realities of pre-revolutionary Nizhny-Novgorod.
Many cities in the Russia have changed their appearance in the last twenty years, Nizhniy-Novgorod among them.
Nizhniy-Novgorod to-day is a transformed regional city, an intellectual and industrial centre and the cradle of the Soviet automobile industry.
Handsome light-coloured buildings have superceded the squat little houses which once held claim to adorn the streets. And the streets themselves have been straightened out and broadened and their surface covered with smooth asphalt. At night they are brightly lighted and gay with moving throngs and busy traffic.