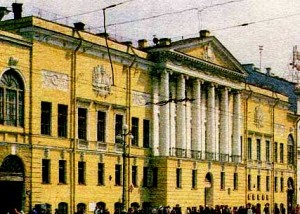 In 1835 the architect Q. Fossati erected a building with a classical portico, and in 1959 it became the Palace of Art Workers, the first in the country. This palace joins two clubs of intellectuals, the House of Art Workers and the Actor’s House.
The palace runs two Universities of Culture, organizes various cycles of lectures, theoretic conferences, evening parties and meetings with prominent men of science, technology and agriculture; numerous discussions of performances and exhibitions of paintings and works by artist-photographers often take place here.
More than 2,000 theatrical workers are members of the Saint Petersburg Branch of the All-Russian Theatrical Society which is housed here. Initiated by M. G. Savina and V. N. Davidov as far back as 1883, this Society has become, in the years of Russianpower, a real scientific and creative institution, an ‘experimental laboratory’ for the theatre.