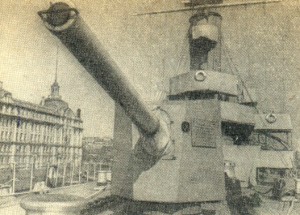 Cruiser ‘Aurora: at Petrogradskaya Naberezhnaya
The legendary cruiser Aurora. On Octobei 25, 1917, the thunder of its guns announced to the whole world the birth of the Sovet State.

The Aurora is the legendary cruiser of the October Revolution. As one of the warships of the revolutionary Baltic Fleet, the Aurora took a most active part in the revolutionary events of 1917. On October 25, 1917, a blank shot was fired from the cruiser. It was a signal for the attack on the Winter Palace. Since 1923 the cruiser has been a training ship. In 1948 it was moored at a permanent berth on the Neva River.
In 1956 a branch of the Central Naval Museum was organized on the Aurora. Its exhibits tell of the fighting record and revolutionary history of this famous ship. Seeing the wireless-cabin of the cruiser, from which on the morning of October 25 (November 7, new style) the appeal To the Citizens of Russia! written by V. I. Lenin was broadcast, or seeing the historical six-inch foredeck gun, the shot from which became the signal for the birth of a new world, one recalls the unforgettable events of the days of the Great October Revolution. Among the gifts exhibited in the ship’s museum are a red banner from the young communists of Italy, a picture of an Alpine flower presented by the Austrian Communists, a portrait of Fidel Castro, the leader of revolutionary Cuba, and others.