The Odessa Opera and Ballet House 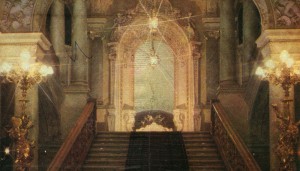 The Odessa Opera and Ballet House is one of the city’s architectural sights. The theatre building was constructed in 1887 according to the project of the Vienna architects F. Felner and G. Gelmer. On this very site there stood before an old municipal theatre built in 1809. Its designer was a Russian architect Toma de Tomon. The old theatre was burnt down in 1873.
The construction of the new building which was to become an architectural pearl of the city was started on September 28, 1884. The curtain was first raised on October 13. Considering the scope of the work done, its complexity and refinement we can call the builders real magicians of their deed.

Legend says that F. Felner who arrived in Odessa from Vienna in 1887 for the opening ceremony cried out: “This is the best theatre in the world”. There is no historical confirmation of this assertion. But there are more than enough enthusiastic comments from the city’s guests. Here in one. It belongs to the English writer James Aldridge who on visiting Odessa in the spring 1983 said: “Magnificent. I haven’t seen in any country of the world an opera house like this”. The design of the exterior of the Odessa Opera House is made, as the specialists hold, in baroque. But there are also many elements of the Renaissance style. The lines of the building are so highly dynamic that a visual effect of lessening its dimensions and minimizing its size is achieved. The dynamism is obtained at the expense of the articulation of the facade, by plasticity of decoration and utilizing the effect of chiaroscuro. The composition of the building is complicated but at the same time very simple: the front part is horseshoe-shaped with three adjacent porticos placed on different levels with a dome crowning the top. Well planned and erected are three horizontal circles. The ground one is squat — dead load of the construction is deliberately increased being devoid of any stucco moulding.
The first circle consists of loggias with Tuscan columns, the tops of which are disk-shaped supporting right-angled slabs. The second circle has loggias with complicated apertures and columns having showy capitals; the large columns are Ionic and the smaller ones are Corinthian. The house has twenty entrances and three additional ones are for the staff. The facade of the edifice is richly decorated with sculptures representing characters of Ancient Greek mythology. Over the main portico is Melpomena placed on a pedestal. She is tearing along in a chariot harnessed to four panthers.

The Muse has a torch in her hand, her right hand is raised in a salute. On both sides are two genii holding laurel garlands. Two more groups are placed on the second pedestal. The one on the right shows Terpsichora teaching a young creature to dance. The left group portrays Orpheus enchanting the Centaur by his playing on the lyre.
Below on both sides of the entrance to the central portico are two more groups: allegoric presentation of Comedy and Tragedy.

There are two alto-relievo portrayals on the facade of the portico right over the balcony — two Glories with garlands in their hands.

In the niches over the second circle you can see the busts of M. Glinka, A. Pushkin, N. Gogol, A. Griboyedov personifying Music, Poetry, Comedy and Drama. The interior decoration is mainly in rococo, lavish and rich. The eye glides from the almost stern simplicity of the boxes to the dress circle in the decor of which there is more freedom; from them the eye glides to the more whimsically decorated boxes of the first and second circles; and then to a graceful and almost airy arcade which frames the gallery.

Magnificent is the ceiling the middle part of which has four paintings representing scenes from Shakespeare’s plays: “Hamlet”, “A Midsummer Night’s Dream”, “A Winter Tale” and “As You Like It”. The central chandelier weighs almost two and a half tons. In 1926 there was another fire. These were the difficult years for the young Soviet Republic. But throghout these times the Government of the Soviet State took full care of the spiritual life of »he working masses. A special resolution assigning sums for the reconstruction of the Odessa Theatre was adopted. People’s Commissar A. Lunacharsky took a constant interest in the progress of the work.
In a year in the spring of 1926 the theatre was reopened.

In 1967 a thorough restoration was carried out. Ten kilograms of gold of the highest standard was used in the course of the work.

Many outstanding Russian and foreign musicians of the end of the XIX century and the XXth centrury appeared on the stage of the theatre. The Odessa Nezhdanova Conservatoire, which is the main source of artists for the Odessa Opera, has produced eminent musicians: D. Oystrakh, E. Gilels, T. Zakh, M. Fikhengolts, B. Rudenko, G. Oleinichenko, E. Chavdar, Z. Khristich. All of them have been pupils of Odessa Conservatoire Professor O. Blagovidova who worked at the Department of Solo Singing from 1933 up to her death in 1975. In to-day’s theatre company are the People’s artist of the USSR R. Sergienko, People’s artists of the Ukrainian SSR N. Ogrenich, A. Rihter, Z. Lysak…

The pride of the theatre is its ballet company which more than once has been on tours including abroad. The company has stable creative links with the Bolshoi Theatre in Moscow. For example, Maya Plisetskaya danced with the Odessa company during its tours in Spain. Before that she staged two ballet performances in the Odessa Theatre. The ballet soloists N. Barysheva, S. Antipova, E. Karavayeva, M. Petoohov, P. Fomin, N. Stoyan, S. Japparov and others are much beloved by the audience. In 1929 the Odessa Opera and Ballet Theatre was awarded the title of academic. The edifice is protected by the State. It is the object of love, care and pride of the inhabitants of the Black Sea city.

Sculpture in an exterior Odessa opera and ballet theater.
October 17, 2012

Sculptures in an exterior Odessa opera and ballet theater.
October 17, 2012

The musicians of the orchestra
October 17, 2012