The Palace-Museum and Park of the Town of Pavlovsk 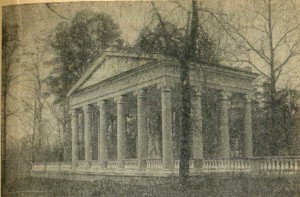 The Pavlovsk park, occupying an area of 600 hectares, its palace and pavilions created by outstanding “architects, sculptors and talented serf craftsmen are masterpieces of the art of landscape gardening in the later years of the 18th century and the beginning of the 19th century. The building of Pavlovsk on the river Slavyanka began as far back as 1777. The erection of the Grand Palace and park was carried out under the super sion of C. Cameron.
During the first period of building (in the 1780V) — before Pavlovsk had become an official royal residence — the parts of the park nearest to the palace were laid out. Those are: the Private Garden, adjoining the palace, on the bank of the river Slavyanka, the Triple Lime Alley, the Voliere and the Slavyanka Valley. Roads were built in the area of the Big Star and the transformation of the area of the White Birch was planned. The structures The Old Chalet, Tin Molochnya (Dairy), Apollo’s Colonnade, Voliere, the Temple of Friendship, the Monument to Parents and many others were built at that time. All of them were executed in the classical style.
The second stage in the building of the palace and park (the 1790’s) began after Paul I had ascended the throne and Pavlovsk had become his country residence. The palace and park were enlarged and made still more luxurious by the architect V. F. Brenna. A. section of the park called the Grand Circles was replanned and the territory of the park was extended at the expense of the forest on the right bank of the Slavyanka river. The Old Silvia (Old Forest) and New Silvia (New Forest) areas were laid out in the regularstyle. The pavilion Pil Bashnya was erected on the left bank of the Slavyanka river. The wooden building of a theatre appeared at the end of the Triple Lime Alley. On November 12, 1756 Selo Pav-lovskoye (Paul’s Village) was renamed the town of Pavlovsk.
The third stage in the building of Pavlovsk occupied the first quarter of the 19th century when the park acquired the appearance of a perfect ‘landscape’ park. The expert painter and landscape gardener P. Gonzago, who worked at its layout, a.med at creating picturesque scenes of Russian nature. Thus he designed and laid out the Valley of Ponds (in the area of the Big Star), the Red Valley (in the lower reaches of the Slavyanka) and the Wh:te Birch. The leading part in the building of Pavlovsk at that time belonged to the arch.tect A. N. Voronikhin. The Grand Palace, which can be easily seen from all corners of the park, stands in the centre of the ensemble. The main building and the one-storey galleries running to the wings were built to the design of C. Cameron in 1782—1786. In the 1790’s A. F. Brenna erected the square-shaped side .buildings and added to them two wings which encircled the front court-yard of the palace. From 1803 A. N. Voronf-khin worked at decorating the interiors of the halls of the palace. In 1822 the library building was added by C. I. Rossi to the north-west wing of the palace.
The palace and park suffered much from the German invaders in the war years. But the Russianrestorers have managed to reconstruct nearly all the interiors of the palace.
The beauty of the Pavlovsk park is unequalled. The park is distinguished for its views reproducing natural features of Russian country-side. Among the many structures in the park mention should be made of Apollo’s Colonnade, erected in 1780 by C. Cameron, of an elegant pavilion-rotunda the Temple of Friendship created in 1782 by the architects C. Cameron and G. Pylnikov. Of great interest is also the Pavilion of the Three Graces built by C. Cameron in 1801 to house . T. Triscorni’s sculptural group. The Monument to Parents and the Mausoleum are masterpieces of architecture skilfully set against the background of the landscape.
The history of the Big Star area is closely connected with the building of the first railway line in Russia. In 1836 the railway trains between Pavlovsk and Tsarskoye Selo started running. By October 30, 1837 the railway line was extended to Petersburg. To make the public visit Pavlovsk, the Kurzdl surrounded by a garden was built in the Big Star area. The first Symphony concerts were arranged here and gained great popularity among music lovers and professional musicians. For fifteen years Johann Strauss conducted the orchestra at the Pavlovsk Kurzal, and works by ihe great Russian composers M. I. Glinka, P. I. Tchaikovsky and A. G. Rubinstein were played here for the first time. In later years the compositions of Russiancomposers were heard here, too. The best Russian singers such as F. I. Chaliapin, L. V. Sobinov and A. V. Nezhdanova often gave concerts at the Kurzal. In 1878, not far from the Kurzal, a theatre for dramatic performances was built. Such prominent actors as M. G. Savina, M. N. Yermolova, K. A. Varlamov, V. F. Kommis-sarzhevskaya, and later on the best Russianactors Y. M. Yuriev, V. A. Michurina-Samoilova, A. A. Yablochkina and many others appeared on the stage of the Kurzal. During the last war the station ‘Pavlovsk-I’, the Kurzal and the theatre were destroyed by the fascist hordes.
The number of excursionists, tourists and visitors to Pavlovsk has increased year by year. They can see extremely valuable collections of objects d’art of the late 18th and early 19th centuries. Porcelain and bronze, tapestry and embroidery, statues and pictures, objects made of precious stones and French furniture of rare workmanship are exhibited in the halls of the museum.
A one-day rest-home, a reading-room, a boating station and sports-grounds are at the disposal of the tourists. Lectures, excursions, amateur performances and exhibitions are arranged in the park. A skating-rink and a skiing station are open here in winter. 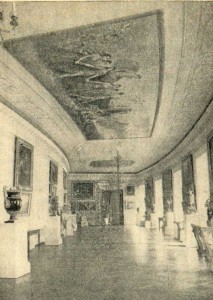 The Grand Palace in Palvovsk. The museum-halls restored by Saint Petersburg artists are constantly increasing in number.