Culture | A Timeline of Putin’s 2 Decades in Power
RssMail

A Timeline of Putin’s 2 Decades in Power 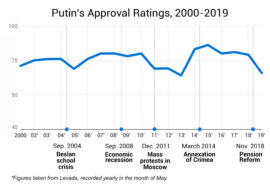 Russian President Vladimir Putin was appointed acting prime minister on Aug. 9, 1999, by then-president Boris Yeltsin. He has been in office as president or prime minister ever since, a period spanning two decades.

Here are some highlights of Putin’s 20 years in power:

Aug. 9, 1999 — During an economic crisis, Boris Yeltsin names little-known security chief Vladimir Putin as his fifth acting prime minister in less than a year, and says he wants Putin to succeed him as president. In the following weeks, apartment bombings across Russia kill more than 300 people, which Putin blames on Chechen terrorists. His popularity is boosted by his tough response, which includes the aerial bombing of parts of Chechnya and an assault to recapture the breakaway southern province. Some Kremlin critics question if Chechen terrorists were really to blame for the apartment bombings.

Aug. 12, 2000 — The Kursk nuclear-powered submarine sinks to the bottom of the Barents Sea killing all 118 crew after an explosion onboard. Putin’s image suffers a jolt after he comments on the crisis only after four days.

2002 — Chechen militants take more than 800 people hostage at a Moscow theater. Special forces end the siege, but use a poison gas in the process which kills many of the hostages.

‘Who Is Putin?’ How Russia Reacted to Leader’s Rise to Power, 20 Years Ago 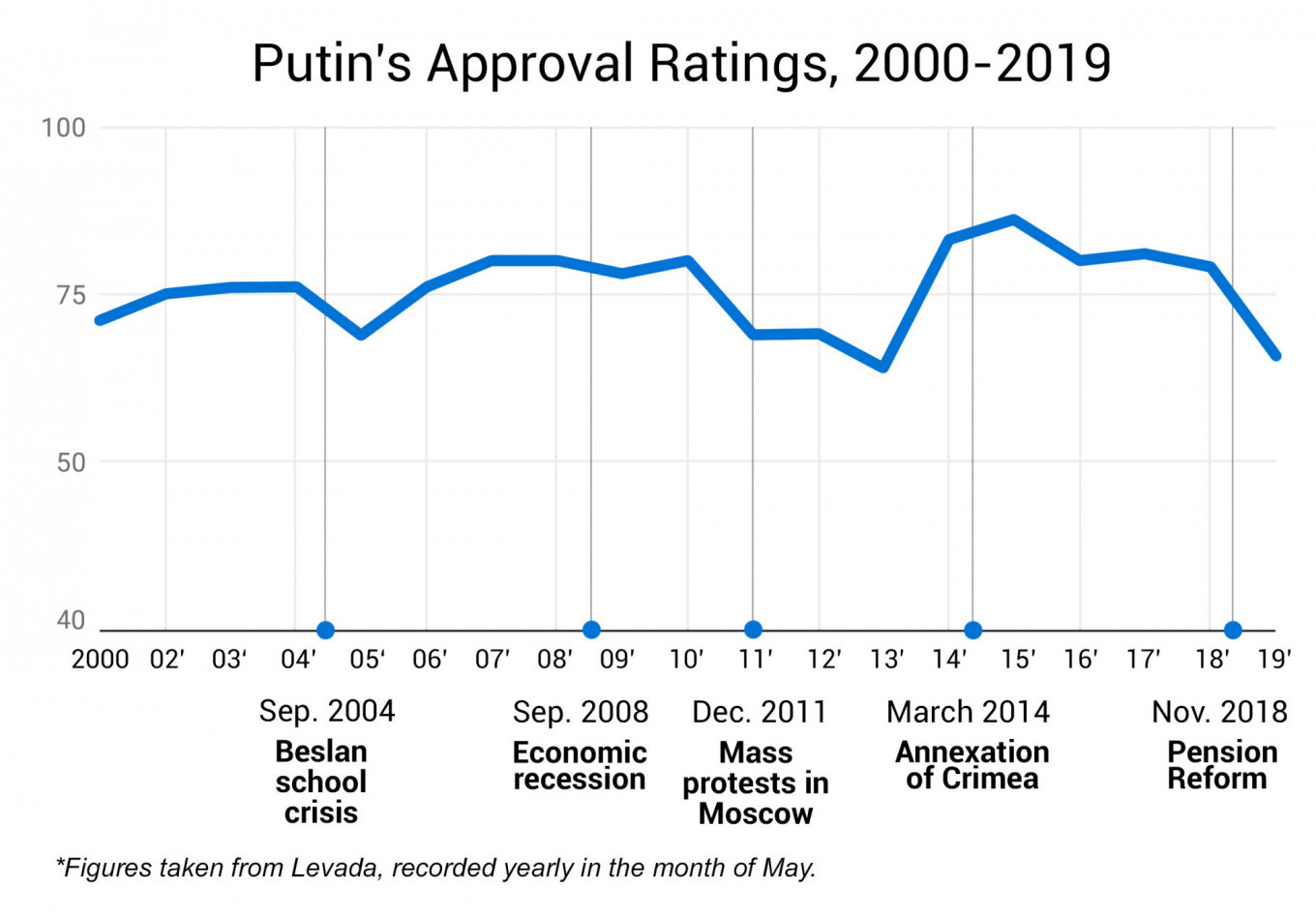 2003 — Oil tycoon Mikhail Khodorkovsky is arrested and charged with fraud. He is later found guilty and jailed in a case his supporters said was punishment for his meddling in politics. He is only released in 2013 after Putin pardons him.

March 2004 — Putin wins second term as president with more than 70% of the vote after oil prices fuel a consumer boom and raise living standards, a trend that continues for another four years.

September 2004 — Islamist fighters seize more than 1,000 people in a school in Beslan, southern Russia, triggering a three-day siege that ends in gunfire. A total of 334 hostages are killed. Over half of them are children. Some parents say the authorities botched the handling of the siege and blame Putin.

2005 — Putin describes the 1991 collapse of the Soviet Union as the “greatest geopolitical catastrophe” of the twentieth century.

2006 — Investigative journalist Anna Politkovskaya, a critic of rights abuses in Chechnya, is murdered in Moscow on Putin’s birthday. Kremlin critic Alexander Litvinenko dies in London that same year after being poisoned with a radioactive substance. A British inquiry years later concludes he was killed by Russian spies.

2007 — Putin gives a speech in Munich in which he lashes out at the United States, accusing Washington of the “almost uncontained hyper use of force in international relations.”

August 2008 — Russia fights and wins a short war with Georgia which loses control over two breakaway regions that are garrisoned with Russian troops.

2012 — Putin returns to the presidency, winning re-election with over 60% of the vote after a decision to extend presidential terms to six from four years. Large anti-Putin protests take place before and after the vote with critics alleging voter fraud.

In Photos: 20 Years of Putin

April 2014 — A pro-Russian separatist uprising breaks out in eastern Ukraine which results in a conflict, still ongoing, which hands the separatists control of a vast swath of territory and leaves over 13,000 people dead. Western countries accuse Russia of backing the uprising; Moscow denies direct involvement.

Sept. 30, 2015 — Russia launches airstrikes in Syria in its biggest Middle East intervention in decades, turning the tide of the conflict in President Bashar al-Assad’s favor.

November 2016 — Donald Trump is elected president of the United States after promising to improve battered ties with Moscow. U.S. authorities determine Russia tried to interfere in the election in his favor, however, casting a pall over U.S-Russia ties despite Russian denials.

March 4, 2018 — A former Russian spy, Sergei Skripal, and his daughter are poisoned in England with a nerve agent. They survive but a woman who lives nearby dies after her partner brings home the poison found in a discarded perfume bottle. Britain accuses Moscow, which denies involvement.

2019 — Protests break out in Moscow over a municipal election which the anti-Kremlin opposition says is unfair. Putin has yet to comment on the demonstrations.