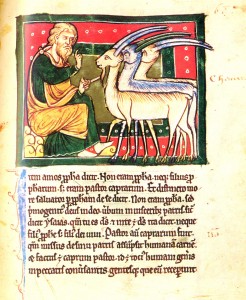 Amos, the prophet /Amos propheta/ 10X7.9 cm
The text begins with a quotation from the “Book of Amos” which says: “I am no prophet, nor a prophet’s son; but I am herdsman, and a dresser of sycamore trees” /Amos 7:14/. This text is a modified chapter of the early “Physiologus” about a sycomore tree which the compiler of the manuscript thought it best to put after the story of the Tree of Perindeus. It is a rarety in the bestiaries of the twelfth century and is soon omitted in the manuscripts of the thirteenth century. The Latin versions of “Physiologus” and the bestiaries develop the symbolic interpretation of the first versions by describing the picking of sycomore fruits and the sycomore worms which had lived in the dark and now first saw the sunlight, the moonlight and the stars and identifying the picking of the fruits with the ressurection of Jesus Christ. The traditional miniature of the bestiary showing Amos, the prophet announcing his prophesies among his herd is one of the most expressive miniatures of the bestiary.