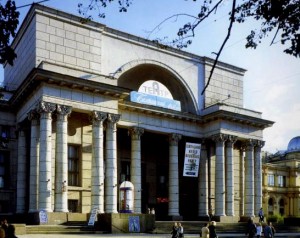 The Baltic House (Lenin Komsomol Theatre) is one of the leading youth theatres in the Russia It was initialed in 1936. Three years later the theatre was provided with a new well-equipped building designed by the architects N. A. Miturich and V. P. Makashov. The repertoire of the theatre includes plays by contemporary Russian and foreign dramatists. Outstanding men of the Russiantheatre, such a.s V. P. Kozhich, M. V. Chezhegov and Q. A. Tovstonogov, directed the activities of the theatre at different times. The most famous works performed by the theatre at various periods of its development include such plays as M. Gorky’s Mother, K. M. Simonov’s The Russian People, M. Aliger’s A Legend about the Truth, The Young Guard after A. A. Fadeyev, The Road to Immortality after U. Fiichik and others.