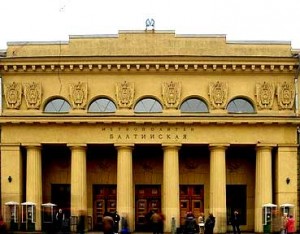 The ‘Baltiyskaya’ underground station is situated near the Baltik Railway Station; it was designed by the architects A. I. Kubasov, M. K. Benois and F. F. Oleynik. The splendid traditions of Russian seamen,  the  glorification  of  the might  of  Russiannaval power, is the main idea of the architectural decoration of the underground palace.
The facade of the vestibule is adorned with bas-relief portraits of prominent men of the Russian Navy: F. F. Ushakov, M. P. Lazarev, V. A. Kornilov, P. S. Nakhimov and S. O. .Makarov. The back wall of the underground hall is decorated with^ a mosaic picture representing The Shot from the ‘Aurora’, which is made of pieces of marble and coloured stones—the only example of so-called Florentine mosaic in Saint Petersburg.